Bloated Disney+ Beatles Doc Should Go On A Diet 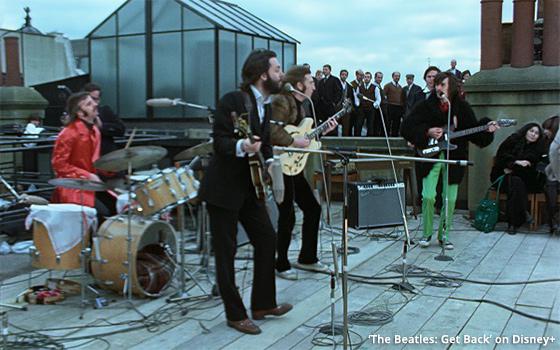 The Clash was a band who were never wrong, yet their declaration in 1979 that “phony Beatlemania has bitten the dust” has unfortunately turned out to be false.

Here we are in the fourth quarter of 2021 and Beatlemania seems to be alive and well, or at the very least still exploitable some 50 years after the band’s four members decided to go their separate ways.

Before they split up, the Beatles worked on their final two albums more or less simultaneously -- “Abbey Road,” released in September 1969, and “Let It Be,” released in May 1970.

The creation of the songs that ended up on both of them appears to be the central plotline (if it can be called that) of a new documentary about the Beatles that was once wisely edited to two hours in length for theatrical release.

But at some point during the pandemic, Disney decided that this documentary should be altered to accommodate four additional hours so that now, it comes in at a weighty, bloated six hours -- a veritable War and Peace of pop music documentaries.

This exercise in making a lean documentary fatter is like a man putting on excess pounds who goes to a tailor to get his pants let out instead of going on a diet.

In addition to this documentary having its proverbial pants let out, the venue for its release has also changed, from theaters to streaming on Disney+ starting this coming Thursday, Thanksgiving. Sorry, Disney, but I have football games to watch.

Speaking of tailors, this Beatles documentary culminates with the “concert” the Beatles performed in January 1969 on the roof of Apple studios located on -- you guessed it -- London’s Savile Row!

This concert (pictured above) was the Beatles' final performance in public. It lasted all of 42 minutes and was reportedly witnessed by a few passersby on their lunch breaks and some others perched on nearby roofs. From this thin gruel are six-hour documentaries made today.

This documentary, titled “The Beatles: Get Back,” is directed by Peter Jackson, who is best known as the director of six epic fantasy movies -- three “Lord of the Rings” and three “Hobbits.”

In the background information provided by the Disney+ hobbits, er, publicists, we learn that Jackson sifted through some 60 hours of film footage languishing undisturbed for 50 years in a vault somewhere that captured the Beatles in the studio as they meandered through the process of creating their last pieces of music together.

This sounds like a dreary thing to watch for six hours -- not unlike a visit to a sausage factory to see how they make sausage, which is something to be avoided.

I suppose we are all lucky that Jackson and Disney didn’t just dump all of this footage into this documentary to make a 60-hour film instead of a six-hour one.

The documentary’s title and its use of the Beatles song title “Get Back” reminds me of the bad leads with which journalists have started scores of Beatles stories over the years.

At the newspaper where I once worked, I witnessed a frustrated editor blow a gasket after he read one too many of these and then ordered that they be banned for all time.

This documentary’s “Get Back” title is no more creative than those lead sentences, which typically would start something like this: “Yeah, yeah, yeah! Paul McCartney is about to be a father again!” or “Do you want to know a secret? Paul McCartney is [fill in blank]!”

One of the aspects of our contemporary culture that I find puzzling is the interest (if true) of young people in music from decades and decades ago.

I can only guess that this is why Disney bothered making this Beatles documentary in the first place, because young people born decades after the Beatles came and went are possibly still listening to the Beatles, or at the very least wearing Beatles t-shirts.

However, sometimes I wonder why some younger people are intrigued and interested in the pop and rock music of the 1960s and ’70s or whether their supposed interest goes beyond just wearing Beatles, Ramones and Rolling Stones “tongue” t-shirts as fashion statements.

This would be like me suddenly forming a fascination at age 25 in 1984 for the music of 1934, 50 years earlier. Among the hits that year: “Tumbling Tumbleweeds” by the Sons of the Pioneers and Jimmy Durante singing his signature song, “Inka Dinka Doo.”

Don’t hold your breath waiting for six-hour documentaries on either of those greats!

“The Beatles: Get Back” starts streaming on Thursday, Thanksgiving Day (November 25), on Disney+.

disney+, music
1 comment about "Bloated Disney+ Beatles Doc Should Go On A Diet".
Check to receive email when comments are posted.
Next story loading