'Sunny in Philadelphia' Does Its City Proud For 15 Seasons 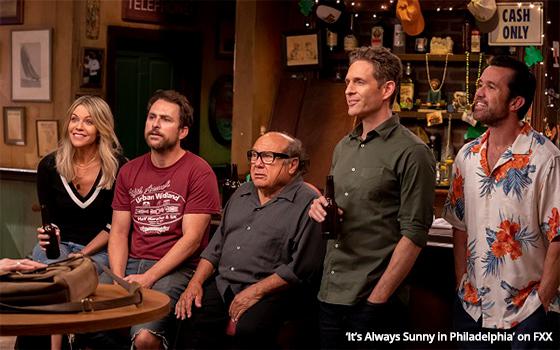 On TV, it has been sunny in Philadelphia since 2005.

Natives of the great city in Pennsylvania where the United States of America was born know that’s not factually true. When it comes to climate, Philadelphia is not San Diego.

But for 16 years, since its debut in 2005, the FX (now FXX) comedy series “It’s Always Sunny in Philadelphia” has been the only series on television with “Philadelphia” in its title, which is no doubt pleasing to the residents of this city that is sometimes referred to as Paris on the Delaware.

This long-running comedy starts its 15th season this week, on Wednesday. It is by far the longest-running of the very few shows in the history of television with a “Philadelphia” title.

In the episode that kicks off the 15th “Sunny” season, the show demonstrates its Philadelphia-ness with a scene in which two of the characters debate a uniquely Philadelphia question: Who is the better athlete, Donovan McNabb (one-time quarterback for the Philadelphia Eagles) or Rocky Balboa, fictional boxer from the “Rocky” movies played by Sylvester Stallone?

Their debate ends in a draw when it gets interrupted by someone else before it reaches any kind of conclusion.

However, the release of the original “Rocky” in 1976, with its story of a South Philadelphia pug who improbably gets a shot at the world heavyweight boxing title was one of the greatest moments in the city’s entire history. The winning athlete in this debate should be Rocky, fictional or not.

Ludicrous debates aside, the season premiere of “Sunny/Philadelphia” is styled as a year-in-review of 2020 in which the five characters tell tales of their pandemic experiences.

On the receiving end of their storytelling is an incredulous representative of the Internal Revenue Service who has turned up at the show’s fictional Philadelphia bar, Paddy’s, to ask them to justify how they spent the three PPP loans they accepted from the U.S. government.

The stories they tell are hilarious tales of fruitless business ventures and other activities with one common result: All of the projects they undertook had a hand in some of the biggest political stories of 2020 and early 2021.

This comedy series is in a class by itself. It is theater of the absurd, slacker-style. The principals involved are evidently committed to it since few shows survive to their 15th season with their founding casts intact.

At this point, the only other comedies on TV that rival this show’s longevity are the even longer-running “The Simpsons” (33 seasons), “South Park” (24) and “Family Guy” (20) -- and they’re all animated.

From City Avenue to the Delaware River, Philadelphia thanks you.

The 15th season of “It’s Always Sunny in Philadelphia” starts on Wednesday (December 1) at 10 p.m. Eastern on FXX, and starts streaming on Thursday on FX on Hulu.