When Producers Tell Their Life Stories, Networks Give Them Shows 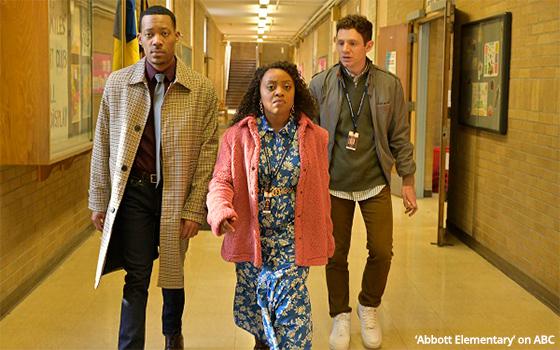 The creators of some TV shows evidently believe strongly that their own lives, no matter how mundane, make for good TV shows.

The networks must believe it too since they OK a number of them every season.

Examples of this trend abound in the business of creating TV shows, but three such examples are sitting in my email inbox right now.

They are promotional emails for three upcoming comedies -- as most (if not all) of these autobiographical show ideas tend to be.

The three are from different networks -- ABC, Fox and NBC -- but the arrival of all three shows is being publicized in the same way.

The common denominator is that each of these emails is styled as a personal letter written to TV columnists and reporters by the shows’ creators.

For example, the letter promoting a new elementary-school comedy on ABC -- “Abbott Elementary” -- is penned (supposedly) by Quinta Brunson, the show’s creator, executive producer and star (that’s her, center, in the photo above).

While this show is not based directly on her own life, in which she does not appear to have ever been an elementary school teacher, it is based on the life of her mother, who was one.

“Based on the stories of my own mother, who was a teacher in Philadelphia for 40 years, the show aims to share with the world the humor that naturally presents itself in this workplace environment,” says this letter, which begins with the salutation “Hello Journalists!”

Her assertion that the show is filled with humor is debatable. We will have a review of the show next week in advance of its premiere date next Tuesday.

The two other shows for which their creators are saying “hello, journalists” are sitcoms based much more directly on these producers’ own lives, as opposed to someone else’s.

In one of them, the producer/creator cites a tragedy -- the death of a friend from lung cancer -- as the inspiration for the Fox comedy she created called “Pivoting,” premiering in January.

“Pivoting” is essentially a midlife crisis comedy involving three female friends who are somewhere in the range of 40 years old and assessing the state of their lives -- “pivoting,” if you will, to what they perceive as the second half of their lives.

Is this really a strong foundation on which to construct a prime-time sitcom? Obviously, the producer/creator, Liz Astrof, thinks so.

“Dear press member,” she begins. “A little back story about my inspiration [which strikes me as an answer to a question nobody was asking] …  “

“When I was 40, the most unthinkable thing happened -- my childhood friend, a kind, loving, athletic, healthy, non-smoking, didn’t-even-own-a-microwave mother of three young children, died of lung cancer. Just like that, she was gone,” the producer tells us, and then added: “Yes [italics hers], it’s a comedy!”

And at this point, I’m wondering what her late friend would think about her childhood friend using her death to come up with a network sitcom, and at her funeral, no less.

But here is how that happened, according to Astrof: “At the funeral, I was struck by the realization that, not only am I mortal, I am also not 22 anymore!

“I don’t have my whole life ahead of me! The ‘someday’ [italics hers] I’d been looking toward, working toward, and pushing everything off to do until someday, is now.

“And I had to ask myself, is this as good as it gets? Is this where I dreamed I’d be at 40? Am I happy? Is anyone happy? What is happy? And is it too late to do it all differently? To press the ‘reset’ button?!

The third first-person piece of publicity that turned up recently in the email inbox was a letter from NBC signed by Phil Augusta Jackson, executive producer and creator (presumably) of a comedy called “Grand Crew,” premiering later this month.

“ ‘Grand Crew’ is … a hangout show based on my life about a group of Black friends navigating the ups and downs of life and love in Los Angeles while sipping on their wine of choice,” writes Jackson.

“I got to make this with my actual friends [a new spin on the autobio sitcom], both in front of the camera and behind the camera, so this opportunity has been a creative dream realized,” he informs us.

Let the record show that the TV Blog never seeks to stand in the way of anyone’s dreams. On the contrary, this column enthusiastically applauds this achievement.

But at the same time, I have to ask: What does this guy’s fulfillment of his dream have to do with the rest of us?