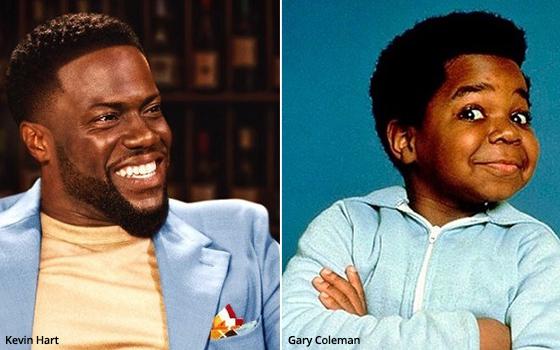 Kevin Hart will play the iconic Gary Coleman role in a new staging next week on ABC of an episode of the old 1970s and ’80s sitcom “Diff’rent Strokes.”

The news about this prime-time event -- most notably the unusual casting -- was announced last month.

The project is the third in the series of old sitcom re-creations that have been spearheaded annually by Jimmy Kimmel since 2019, in partnership with Norman Lear, now 99.

The series carries the umbrella title of “Live In Front Of a Studio Audience,” an announcement commonly heard at the outset of many of the sitcoms of the 1970s and 1980s.

This particular installment of the series is titled “Live In Front Of a Studio Audience: ‘The Facts of Life’ and “Diff’rent Strokes’.”

These new re-creations of formerly half-hour shows will be aired live for a running time of 90 minutes starting at 8 p.m. Eastern on ABC next Tuesday (December 7).

Previous vintage sitcoms that have been remade for these one-night-only, live events were “All in the Family,” “The Jeffersons” and “Good Times” -- all Norman Lear sitcoms.

Though he reportedly had a hand in developing “Diff’rent Strokes,” from which “The Facts of Life” was spun off, neither show was a Norman Lear production, according to Wikipedia.

All of these sitcom re-creations have featured A-list stars in iconic roles, including Woody Harrelson and Marisa Tomei as Archie and Edith Bunker, and Jamie Foxx and Wanda Sykes as George and Louise Jefferson.

But this month’s event features two well-remembered network sitcoms that were principally about children. “Diff’rent Strokes” aired on NBC, then ABC, from 1978 to 1986. “The Facts of Life” aired on NBC from 1979 to 1988 on NBC.

The shows that were re-created previously did not come with the challenge of casting juveniles. For this month's re-stagings, however, the producers have apparently bypassed that issue by casting adults in the child roles.

These include Kevin Hart, 42, playing perhaps the best-known role in both shows -- Arnold Jackson, one of the most indelible characters in the history of mainstream television.

The character was played, of course, by the late Gary Coleman, who happened also to be 42 years old when he died in 2010.

Among other things, the Arnold Jackson character was famous for his oft-repeated catchphrase “What’chu talkin’ ’bout?”

There is even a YouTube “What’chu talkin’ ‘bout?’mash-up someone made in which Kevin Hart's face has been superimposed on Coleman's. It is hilarious.

There is no word yet on who will play the Drummond character's daughter, Kimberly, played originally by the late Dana Plato.

Meanwhile, the cast of the “Facts of Life” re-creation will include Jennifer Aniston as Blair Warner, one of the all-girl boarding school's students in the original who was played by Lisa Whelchel.

Ann Dowd will play Mrs. Garrett, the role played by the late Charlotte Rae, who appeared in both series.

While “Diff’rent Strokes” is one of the best-remembered sitcoms of its era, it is also well-known, unfortunately, for the fates of its three child stars, all of whom struggled to find acting work after the show was over and they transitioned from childhood to adulthood.

Todd Bridges became addicted to cocaine while in his 20s and was arrested on a variety of offenses. The most serious of these was the attempted murder of an L.A. drug dealer who survived the attack, although he had been shot multiple times, allegedly by Bridges.

Bridges was acquitted of the charge, however, when his lawyer, Johnnie Cochran, argued that Bridges had been abused as a child.

As for Coleman, he suffered from a kidney ailment for his entire life. In 1998, he was charged with assaulting a woman in a mall where he was working as a security guard. He died in 2010 after he sustained a head injury from a fall in his home in Provo, Utah.

Kevin Hart photo courtesy of NBCUniversal for his current talk show on Peacock, “Hart to Heart.”