From Wonder Woman To Matrix, Serena Williams Helps DirecTV Stream Get Its Rebrand Together 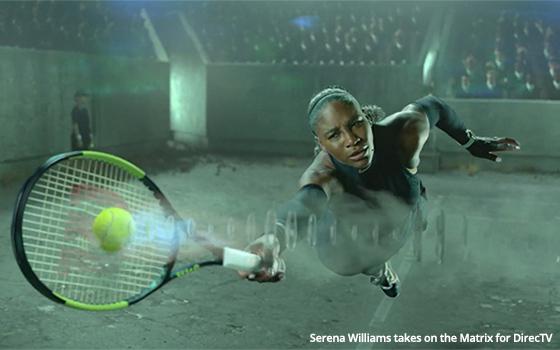 Did you ever see a parallel between Serena Williams and "The Matrix" before?

Neither did I,  but that’s the subject of this ad for DirecTV Stream from TBWA\Chiat\Day Los Angeles. The ad starts with two guys in a park looking at a video of Serena on a phone. Soon The Matrix pops up and the screen keeps flipping between the two, causing one guy to explain, “Serena, The Matrix, Serena, The Matrix…”

Then, onscreen, the crowd turns into people from the Matrix (wearing sunglasses and dark suits) and Serena has to choose between a green and blue tennis ball. Soon she’s playing about a dozen clones before a crowd of Matrix-ized fans. Serena then returns a ball in slow-motion and we are back in the park.

“Get your TV together,” says the announcer to introduce the DirecTV Stream, formerly known as AT&T TV.  Earlier this year, Williams portrayed Wonder Woman as part of the streaming service's rebranding effort.

The new ad references "The Matrix Resurrections," which premieres on HBO Max on Dec. 22. Apparently, Keanu Reeves was considering a cameo in the ad, but instead we get a squirrel suffering from Matrix glitches.