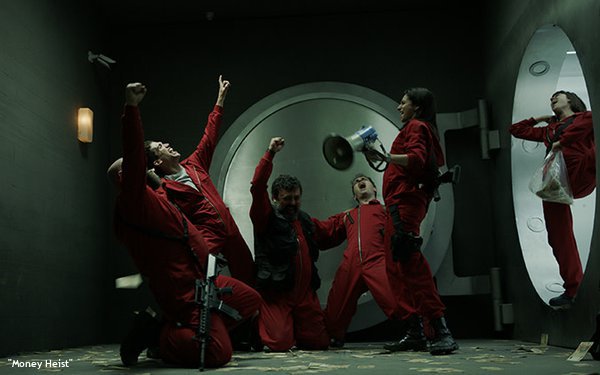 With threats of another lockdown looming, the holiday season may turn less jolly. As we learned in 2020, streaming can be a total escape from fraught reality -- or plain old holiday stress -- to faraway destinations.

Here are a few suggestions for your video trips:

Netflix’s global hit “Money Heist” provides a taste of Spain in its story of renegade robbers who aim to pull off some big jobs. How big? Well, in seasons one and two, the group takes over the Spanish Mint and, with the help of their hostages, starts printing euros, targeting an even billion.

The show’s fast-paced plot is as addictive as caramel popcorn. So if you’re not fluent in Spanish, I’d suggest watching the dubbed version -- you won’t want to spend time reading subtitles. The actors doing the dubbing are really excellent, and their voices are what truly transport me to another country. There are no heavy Spanish accents, but the Latin tone in the lilt of their voices -- especially for the Berlin and Raquel characters -- sounds musical and lovely.

The biggest attraction of Netflix’s “Call My Agent!” is the chance to study the Gallic temperament up close and catch some glimpses of Paris. This is definitely not a show where it’s a hardship to read subtitles -- it’s a blast to hear the melodic cadences of spoken French. (Not to imply that Spanish isn’t nice to listen to, too, but dubbing is more expedient for “Money Heist.”)

The comedy about a Paris talent agency lets you discover some French actors you probably haven’t heard of, and see others you may know (Juliette Binoche, anyone?), all playing weirder or more annoying versions of themselves. Still, it’s the fictional movie directors who are often the real villains, coming across as intellectually pretentious jerks. There’s also the pleasure of seeing older actresses represented -- including my favorite episode, in season four, where Sigourney Weaver (visiting from Hollywood and speaking great French) gets her own dance scene.

For a true eccentric English experience, there’s “Doc Martin,” featuring the so-grumpy-it’s-hilarious (watch him interacting with a lovable dog) eponymous protagonist, who moves to the sleepy fishing village of Portwenn and gets to experience beautiful scenery and small-town weirdness. (On Acorn and the free Hoopla library-based service, with the first five seasons also on Hulu).

MediaPost editor Fern Siegel suggests “A Place To Call Home” (Acorn). Sarah Adam, a nurse returning to 1950s Australia after 20 years in Europe, interacts with a wealthy family coping with post-war changes, passions and assorted intrigues. A second rec is "The Great" (Hulu), a beautifully designed, snarky look at the Russian imperial court of Catherine the Great, starring an incandescent Elle Fanning.

Marketing Daily writer Sarah Mahoney’s pick is the crime drama “Shetland” (BritBox), spotlighting the “beautiful, windswept and desolate landscape of the Shetland Islands, where folks have impossible-to-understand accents” (turn on the captions, people!).