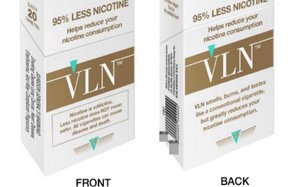 22nd Century uses biotechnology to alter the level of nicotine in tobacco plants through genetic engineering and gene editing. The resulting cigarettes burn, smell and taste the same as regular ones. The Buffalo-based company plans to begin distributing and test marketing its cigarettes in the next three months.

Among the marketing claims that 22nd Century will be able to make is that smoking its cigarettes can “greatly reduce” nicotine consumption.

“We know that three out of four adult smokers want to quit and the data on these products show they can help addicted adult smokers transition away from highly addictive combusted cigarettes,” Mitch Zeller, director of the FDA’s Center for Tobacco Products, said in announcing the approval.

When using any reduced-exposure claims in labeling or advertising claims, 22nd Century must include “Helps you smoke less.” The FDA recommended that labeling and advertising also include the statement “Nicotine is addictive. Less nicotine does NOT mean safer. All cigarettes can cause disease and death.”

On a Nov. 4 conference call with financial analysts to discuss the company’s Q3 financials, 22nd Century president and COO Mike Zercher said VLN “will be the most disruptive new tobacco product to come to market in decades.”

He added that the company was in “advanced discussions with well-known national and regional chains in the tobacco trade. And we have a pipeline of additional chains that are closely tracking our progress and ready to join with us once MRTP is granted.”

VLN will be positioned as “a premium brand and product, which will command higher revenue and therefore higher margin.”

22nd Century’s FDA win comes as the federal government contemplates mandating a reduction in the amount of nicotine in cigarettes.

Last April, The Wall Street Journal reported that the Biden Administration was considering requiring tobacco companies to limit the amount of nicotine in cigarettes to levels at which they are no longer addictive.

At the time, 22nd Century announced that it was prepared to license its reduced-nicotine-content tobacco technology “to every cigarette manufacturer.”

As noted by the Journal, Scott Gottlieb, an FDA commissioner under the Trump administration, pursued nicotine reduction in cigarettes starting in 2017 but those plans were sidelined after he left the agency in 2019.

In November, President Biden nominated Dr. Rob Califf as FDA commissioner to replacer acting commissioner Janet Woodcock. According to 22nd Century’s Zercher, a nicotine cap “will be a key priority” for Califf if he is nominated and confirmed.