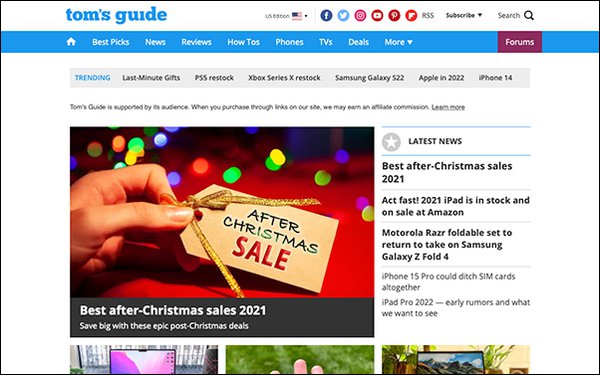 The media giant Future PLC’s portfolio of technology brands reported rapid audience growth for the month of November, touching just under 30% of all Americans online that month, according to Comscore Media Metrix.

In doing so, Future stated it has cemented a position among the top tech online destinations in the U.S. Future, with headquarters in Bath, U.K., has more than 240 brands in more than a dozen vertical sectors, including sports, music, TV and entertainment, technology, games and woman’s interest.

In addition to the tech brands and CinemaBlend the company publishes The Week, Marie Claire, Kiplinger, Guitar Player, Classic Rock and Digital Camera, among many others.

In particular, the recent tech growth has been spearheaded by expansion into new content areas for the Tom’s Guide and TechRadar brands. The AV brand What Hi-Fi! also saw a massive 75% month-over-month audience growth, driven by Black Friday deals and Future’s content initiatives.

The audience growth is fueling revenue growth, too.

“We provide our audiences with a winning combination of unbiased product recommendations based on rigorous reviews, and combine that with our proprietary Hawk eCommerce technology. This helps users identify recommended products at the best prices across multiple retailers,” he added.

The technology products that saw the highest consumer spending growth in the 2021 Black Friday shopping period, according to Future, were TVs (+35%), wellness tech (+34%), and tablets (+34%).

TBlack Friday remained a key online shopping day. Cyber Monday, however, no longer drove the largest online consumer purchases, likely due to a wider time frame for deals and consumers making their purchases ahead of time.

The recently acquired CinemaBlend also saw strong audience growth, reaching more than 17.5 million Americans and logging month-over-month growth of 18%. This growth was attributed largely to the migration of the CinemaBlend site to Vanilla, Future's proprietary CMS platform. This in-house content management system is optimized for SEO performance and produced year-over-year audience growth of 104% for CinemaBlend.

“Our expansion into new content areas and verticals in 2021 has resulted in a year of incredible overall growth for Future in both North America and the U.K.,” Asadi said. “We’re thrilled to be finishing it off with strong audience-growth performance.”