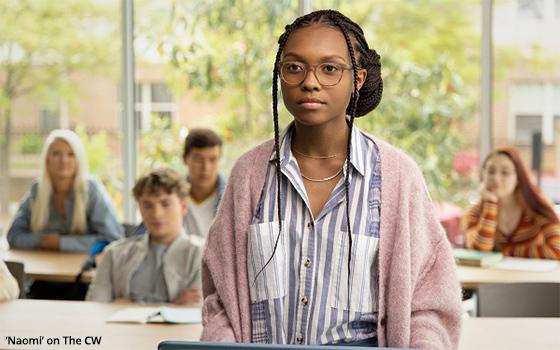 The CW does it again with another incredibly crafted drama series for its young target audience of teens and young adults.

Here at TV Blog headquarters, The CW has one of the most stellar records of any of the many networks and streaming services that this column covers.

Partial disclosure: Age-wise, I am not anywhere close to the ages that The CW and its content are designed to reach. (Not to be disclosed here: My actual age).

And yet, I find that the majority of The CW shows that I take up for reviewing here are, with only a handful of exceptions, among the most anticipated and enjoyable of all of the shows that I have access to in advance of their airdates.

Usually, I know I am in for a very pleasant experience -- which happened yet again on Friday when I previewed the premiere episode of “Naomi,” the aforementioned new drama, premiering Tuesday night.

Like so many other CW characters and shows, the title character of “Naomi,” Naomi MacDuffie (played by teenage Kaci MacDuffie, pictured above), springs from the DC universe.

And because I know next to nothing about that universe and its inhabitants, this character is completely new to me.

She’s a brainy, popular teen in a small, fictional town called Port Oswego (possibly in Oregon, but this is not specified).

The town is adjacent to an army base, which means many of the kids there have parents who work on the base either as Army personnel or as civilians.

Naomi’s parents, who adopted her at a young age, fit into both categories -- Dad (Barry Watson) is an officer and Mom (Mouzam Makkar) is a teacher of foreign languages on the base.

Naomi, 16, is a comic book maven whose primary preference is Superman.  “Naomi” is the first TV show since “Seinfeld” with this much Superman love.

She operates a Superman fan site that we learn is one of the most popular in the world (according to her).

In the series premiere, she and the rest of her town are stunned when a superbeing suddenly plummets from space into the public square while engaged in some sort of epic battle with a superfoe who is also unidentified.

Then the two fly off -- still grappling -- as quickly as they arrived, while stunned residents, including Naomi, try to figure out what happened.

Was this strange visitor from another planet the one and only Superman? In the aftermath of this visit from the two super-strangers, the show emerges as a classic teen mystery in which Naomi and her friends search for the truth and get in various scrapes in the process.

The show is exciting, earnest and imaginative. In the tradition of great story-telling, the premiere episode ends with a question that is important enough to virtually guarantee tune-in the following week.

Now reportedly for sale by its owners -- ViacomCBS and WarnerMedia -- the TV Blog hopes The CW will survive whatever happens to it. As for this new show -- bravo, CW.

television
1 comment about "CW's Stellar Record Of Excellence Continues With 'Naomi'".
Check to receive email when comments are posted.
Next story loading