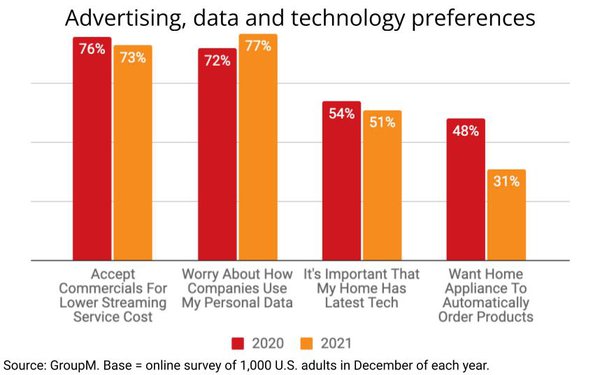 As the world's biggest consumer media and technology players meet in person in Las Vegas or virtually online as part of the annual CES conference, new research from GroupM suggests Americans are retrenching on their desire for the latest consumer media technology, as well as advertising and personal data issues related to it.

The report, GroupM's "2020-21 Consumer Tech Preferences" study, is based on a survey of 1,000 US. adults fielded in December, and finds fewer Americans are keen on adopting new tech in their households, and a dramatic fall-off in those who are embracing Internet-of-Things applications such as a household appliance automatically ordering products when needed.

The study also found an increase in the percentage of Americans concerned about how companies are utilizing their personal digital data, and that fewer are now willing to accept commercials as a means of lowering the cost of streaming services.

That last point -- the increasing willingness of consumers to pay to avoid commercials in streaming services -- is part of an ongoing trend GroupM has been tracking and discussing recently as part of its ad forecasting modeling, which anticipates a reduction in the ability to reach consumers through video advertising as more consumers shift from linear TV to streaming, and as more of that is either commercial-free or has reduced commercial loads.

Noting that the finding, which compares this year's responses to a similar survey fielded last year, GroupM Global President of Business Intelligence Brian Wieser noted that the downward trend is within a margin of error so may not be that significant, but when viewed in a broader context, it reaffirms his belief that there is a retrenchment in consumers' willingness to accept advertising, as well as new technology and data usage models.

"We see all of the other data points going in that same direction that broadly support a narrative that consumer don't want advertising in their streaming environments as much as they might have last year," Wieser tells MediaPost, adding, "They're less tolerant of it and they are more concerned about privacy. And they don't feel a need to have the newest devices as much. And they're not the narratives that a lot of people in the industry wish were true."

Wieser isn't suggesting that American consumers are reverting to a form of media Luddism, but he says the immediate trend lines suggest a period of retrenchment, not "progress" based on how the ad industry would define it.

"On almost every single dimension that relates to what some would call progress, it's going in the other direction," he says, adding, "I've always argued that the narrative that consumers would be willing to trade data something of value was wrong, or that they necessarily like advertising. It never struck me that those ideas were correct. And the very clear direction of all of the questions we asked was to me quite striking."