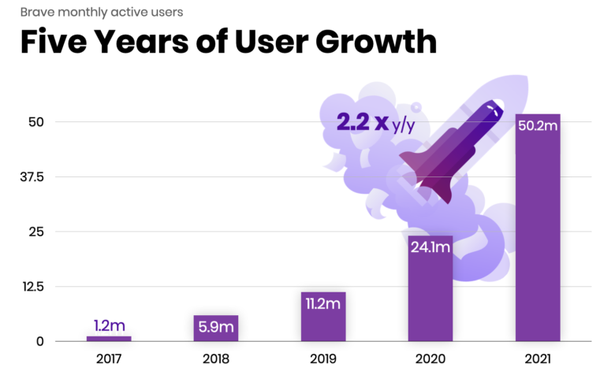 Brave made several major updates during the past year that contributed to the growth of its services, including the launches of Brave Search, which the company built on top of an independent index, and Brave Talk, a video-conferencing platform. It also strengthened its ties to crypto, such as Brave Wallet, partnerships with Solana and Gemini, and more.

Brave CEO and Co-Founder Brendan Eich in a blog post made an early prediction for 2022.

“We aim to double this growth again in 2022 and engage with even more users who seek a privacy-conscious way to browse the Web that rewards them instead of punishes them with tracking, and helps them directly support creators,” he wrote.

The company announced today that its search engine reached 2.3 billion annualized queries in 2021, catapulting the company to grow at a rate of two times for the fifth straight year.

The company announced Wednesday that it hit its goal of 50 million monthly active users by the end of 2021, up from 24 million in the prior year.

Brave’s ad platform has expanded as revenue has grown four times during the past 12 months. Advertising is supported in nearly 200 countries with more than 7.5 billion ad confirmation events to date.

More than 8 million users earned Brave Rewards using BAT, a token that powers a blockchain-enabled digital ad platform in the Brave Browser. This is where users can watch ads in exchange for BAT rewards.

Brave's mobile browser attracted users in 2021, with more than 10 million downloads throughout the year.