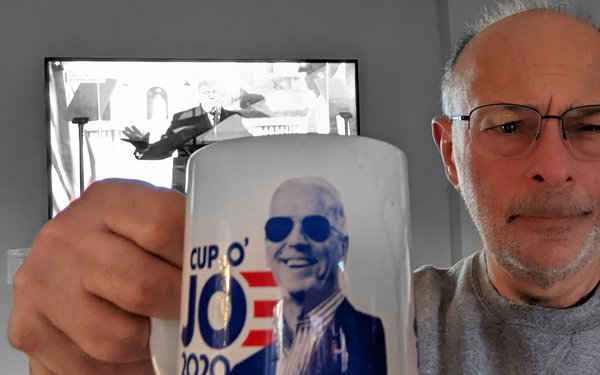 “We’re going to walk down. And I’ll be there with you,” the twice impeached former president said in a clip that began MSNBC’s coverage of the Jan. 6 anniversary Thursday.

The clip set the tone for MSNBC’s coverage for the day, but also reminded me about a fundamental question I’ve been asking ever since hearing the other guy state it a year ago: Did any of his supporters notice he was not actually marching with them, storming the steps of the Capitol and cheering on “our brave senators and congressmen and women?"

Did any of them notice that the wannabe strongman who egged them on to “be strong” and “take back our country” simply exited stage left to watch the insurrection unfold on television from the comfort of his home while munching on the popped kernels of American democracy?

So as I sat down for a day of whiplash viewing of the Big 3 cable news networks' coverage of the Capitol insurrection anniversary, I began it with a cup of Joe to commemorate the fact that it also was the one-year anniversary that Biden officially became President Elect, even as the other guy incited a riot inside our nation's Capitol.

Yes, this is TVBlog, not Red, White & Blog, because I’m filling in for Adam Buckman, who took a much-deserved day off, but happy to fill in and give you my blow-by-blow of Wednesday’s TV news coverage.

Not surprisingly, there were no surprises.

MSNBC aired straight, wall-to-wall coverage of the events commemorating the anniversary of the insurrection, CNN strived to provide more neutral talking-head coverage, and Fox News Channel adopted its party line that Democrats were just using the occasion for political leverage, not nation-healing or to shed any new light on the attack on the Capitol or what America should do about it.

While all three networks played their obligatory roles, Fox News’ was the most cartoon-like, so I thought to sum it up utilizing a cartoon format.

This column ends with me tossing it back to you. What do you think? Aside from counting the minutes until Adam Buckman returns to “TVBlog?” 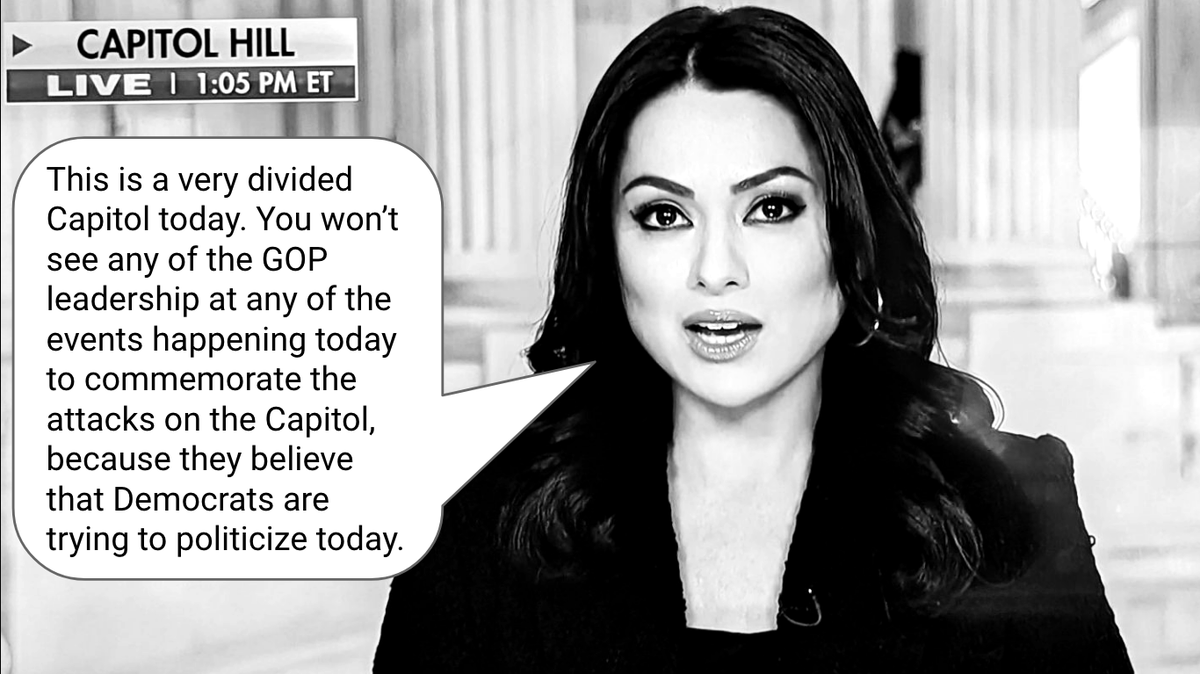 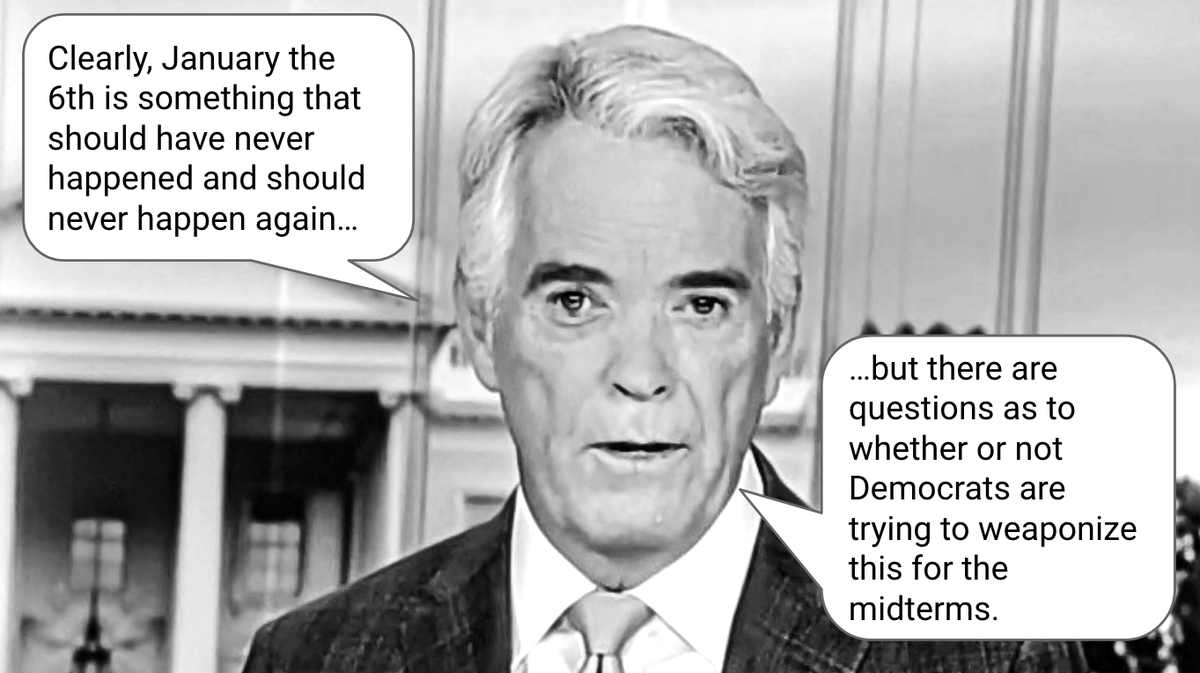 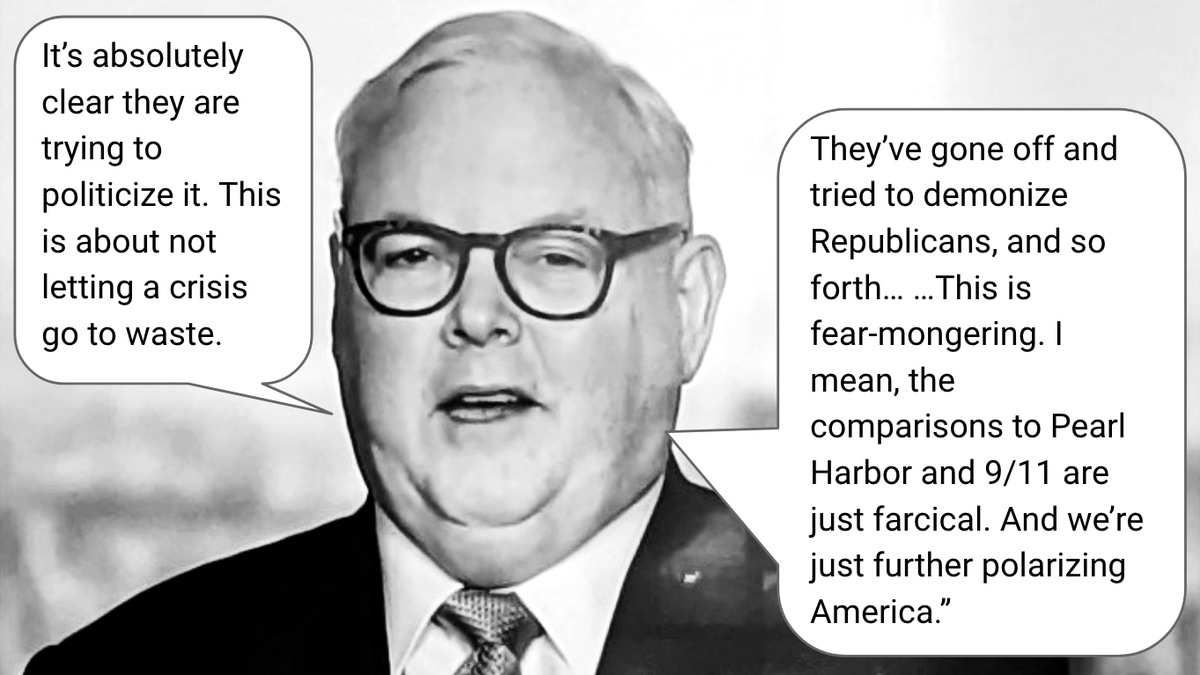 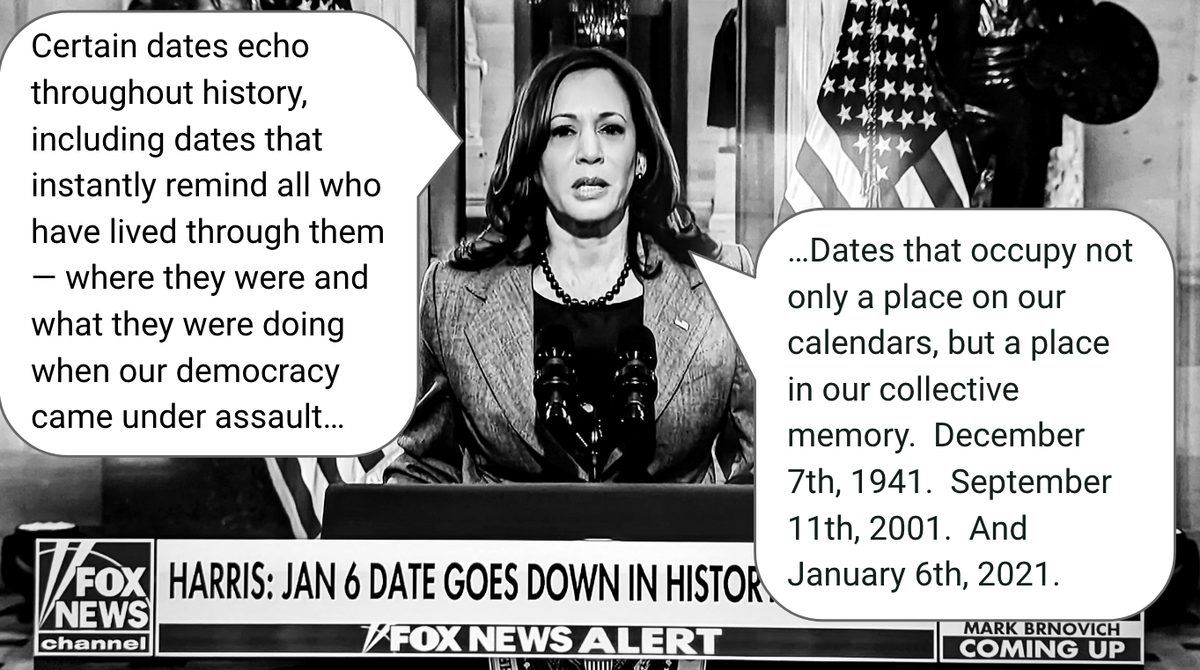 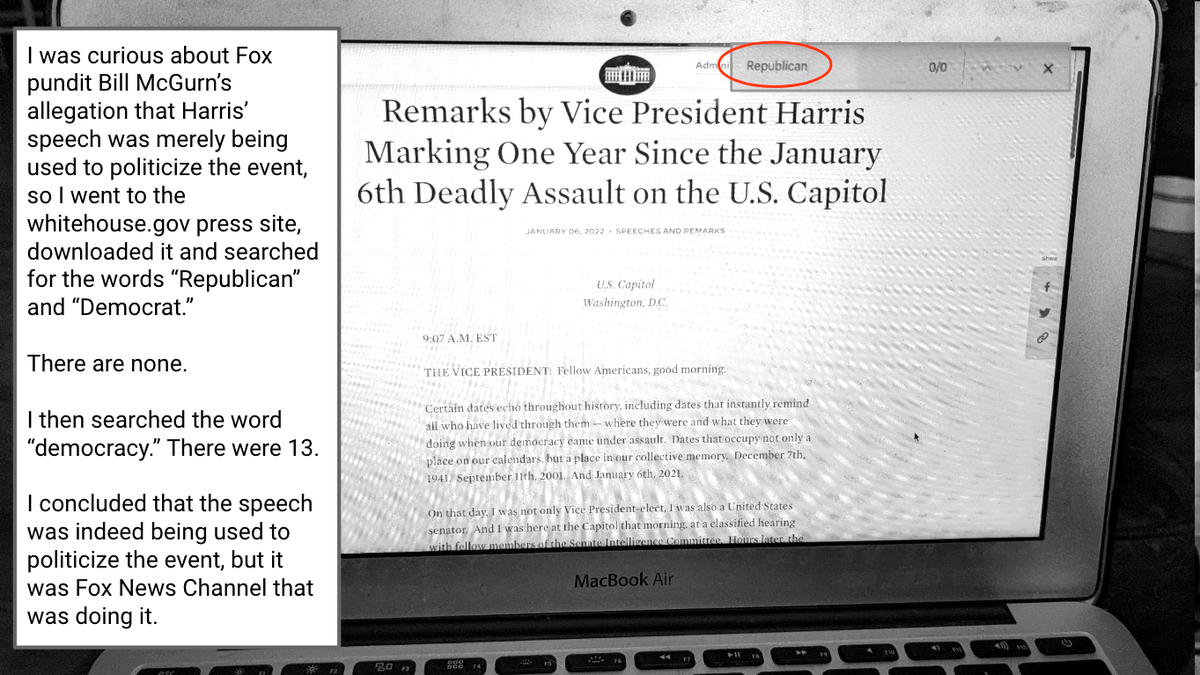 Next, I downloaded President Biden's speech, which most non-Fox News pundits and on-air personalities described as the greatest speech of his presidency so far. I thought so, too. Not for any partisan reasons, but quite the opposite, because he focused on using the occasion to remind us how important our democracy is, why both sides need to work hard to preserve it, and why we need to recognize the threat that began long before January 6, 2021, and will continue long beyond January 6, 2022 -- especially from "many Republicans who fear [the other guy's] wrath." You know -- cowards, traitors and opportunists who call themselves leaders, but who are following an increasingly seditious party line.

Yes, Biden did invoke the word "Republican" five times in his speech, but the reference above was the only one calling some of them out. And frankly, it was long overdue from a sitting President, given that they represent the greatest threat to our democracy. Not because they continue to obstruct and gridlock politically, policy- and legislative-wise, but because they have enabled the Big Lie that the presidential election was illegitimate, that the January 6 insurrection was not that big a deal, nor is its aftermath.

The fact that ONLY one sitting Republican -- Liz Cheney -- deigned to even show up to commemorate January 6 is all any American needs to know about where the actual partisanship or politicizing is.

"While some courageous men and women in the Republican Party are standing against it, trying to uphold the principles of that party, too many others are transforming that party into something else," Biden called out in his speech, adding: "They seem no longer to want to be the party — the party of Lincoln, Eisenhower, Reagan, the Bushes.

"But whatever my other disagreements are with Republicans who support the rule of law and not the rule of a single man, I will always seek to work together with them to find shared solutions where possible. Because if we have a shared belief in democracy, then anything is possible — anything."

That's not politicizing -- it's calling out a clear and present danger the way a genuine leader should, because the time for sweeping things under the rug is over.

What Biden did not utter once in his speech was the actual name of the former president, which makes me think that maybe he's been reading my columns over the past few years, because the only thing that guy ever wanted was to have people say his name -- for good or ill, in the context of business, media and/or politics -- because it's the only thing he lives for. I knew that as a media journalist long before he entered actual politics, and back to the initial question in this column: I don't understand why his supporters don't understand that about him. He's in it for one reason and one reason only: himself.

Or as Biden put it, the truth is that the former president spread a web of lies, because "he values power over principle, because he sees his own interests as more important than his country’s interests and America’s interests, and because his bruised ego matters more to him than our democracy or our Constitution."

To me, that was the single best line of Biden's speech and the one I've been waiting to hear him say for nearly a year as actual president, because we need to be honest about what the threat is and what is motivating it.

As he was leaving his speech, Biden was confronted by a press gaggle asking him whether his speech would further divide America by calling out some Republicans, why he didn't call out the former president by his name, and how his speech would help heal the nation?

I conclude with two final panels annotating his response. 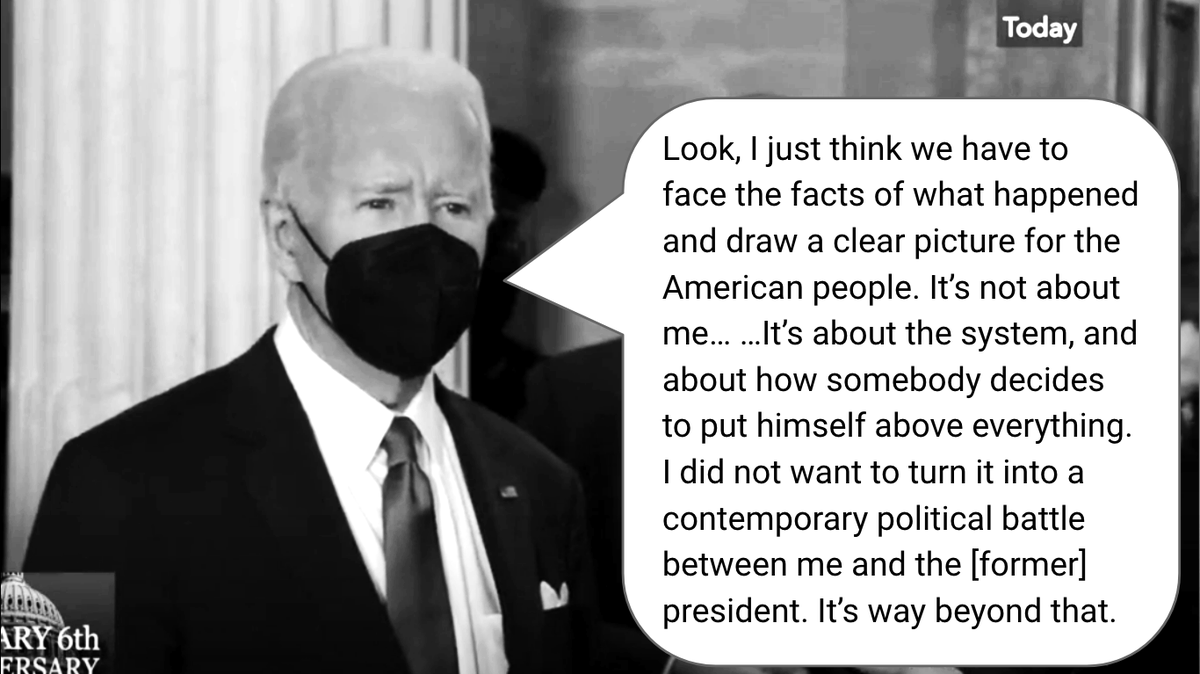 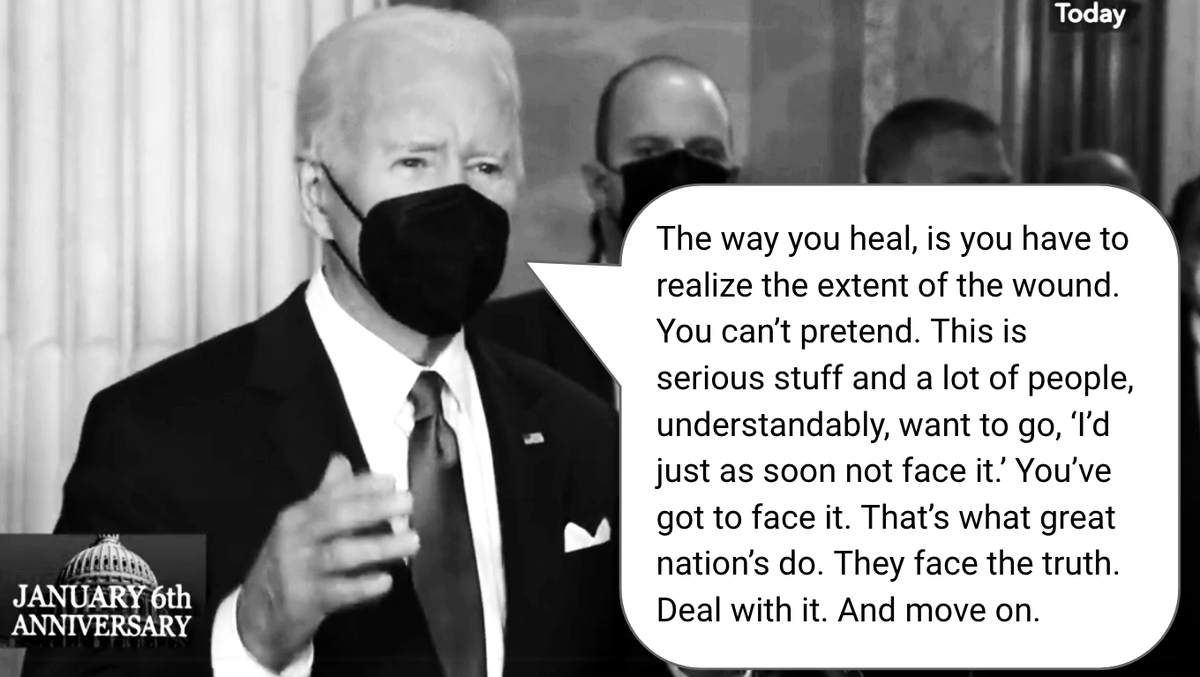