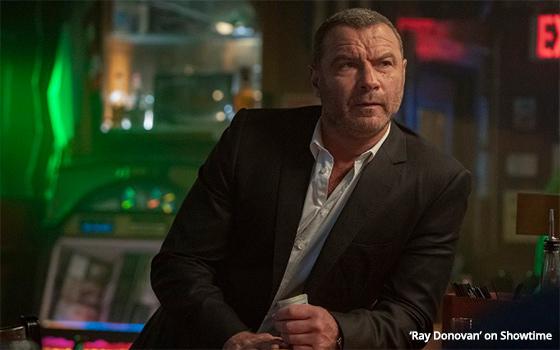 The Ray Donovan character introduced nine years ago on Showtime has been indestructible, and apparently so is the show, “Ray Donovan.”

Cancelled after seven seasons in January 2020, “Ray” is back again for one more go, in the form of a 100-minute movie that seems likely to be the end.

Will Ray the TV character survive yet another chapter of this Donovan family saga that is like no other?

From the beginning, “Ray Donovan” has been about family -- his career-criminal father, Mickey (played by Jon Voight in one of the best performances on TV this century), his two brothers, his wife (now late wife) and two children.

But the entrenched issues of the Donovans were only part of the show, although they eventually came to dominate it.

In the beginning, that was not the case. When Ray -- played with otherworldly intensity by Liev Schreiber (above photo) -- was first introduced to us, this son of South Boston was working in Hollywood as a covert “fixer” for a well-connected Hollywood attorney, Ezra Goldman (played by Elliott Gould, who left the show in 2016).

When movie stars left messes, Ray cleaned them up -- and he and Ezra were well-paid for it.

In seasons six and seven, Ray moved to New York and took up some of the same business. But his family story gradually moved to the forefront, which is where it is positioned in this new TV movie.

This entire episode, which is likely serving as the show’s finale, is about Ray and his father. Throughout most of the show, Ray is seen in a telephone conversation with his psychiatrist, played once again by Alan Alda.

As Ray talks about his family, we are shown the whole sordid story in flashback sequences. Ray is seen as a small boy, a teen and a young adult being raised by a young Mickey Donovan, a reckless criminal.

These scenes may remind some of the recent “Sopranos” prequel movie, “The Many Saints of Newark,” which also introduced that show’s familiar characters in the years preceding the show -- most notably, the boy Tony.

The device works very well in this “Ray Donovan” TV movie, and long-time fans of the show (the TV Blog included) will likely come away well-satisfied.