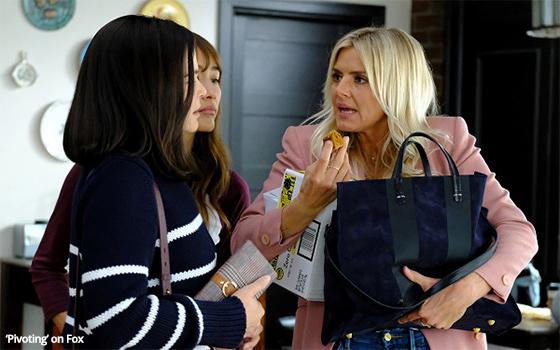 If a female audience is what Fox is aiming for with this new comedy called “Pivoting,” then the network scores a bull’s-eye.

This new show (having its time-slot premiere this Thursday) is focused squarely on women -- particularly women hovering around 40 and therefore well-positioned within Fox’s 18-49 target audience.

The show’s one-word title, “Pivoting,” refers to the way these women -- three lifelong friends -- are reassessing their lives following the death of another close friend who died of cancer at age 40.

Sounds pretty dreary, right? I thought so, ever since I received a promotional email about the show back on November 29. Back then I thought: How on earth will they make a comedy out of a scenario that just seems sad?

Having watched the premiere episode (which aired as a pre-premiere “preview” last Sunday), one of the rarest things to ever occur actually happened: I was wrong.

The show actually works. For openers, the three female leads all seem to gel in such a way that you believe their characters are real friends.

Credit for this must go to the show’s production team -- writers, director(s), producers -- under the management of Liz Astrof, who is listed as showrunner, executive producer and writer. She may also be the show’s creator, but this is not specified in the publicity materials.

Given its subject matter, the show is surprisingly lighthearted -- without ever dishonoring or making light of the death of this woman at a tragically young age.

And it is not all humor either. Some of the scenes are written and choreographed with great poignancy and act as a counter-balance to the show’s more lighthearted moments.

It is also worth noting that at least some of the conversations between these women in the show concerns sexual subjects in ways that border on graphic.

Thus, the show is really for adults, or more to the point, female adults.

“Pivoting” had a preview debut Sunday night on Fox, but has its time-period premiere on Thursday (January 13) at 9:30 p.m. Eastern.