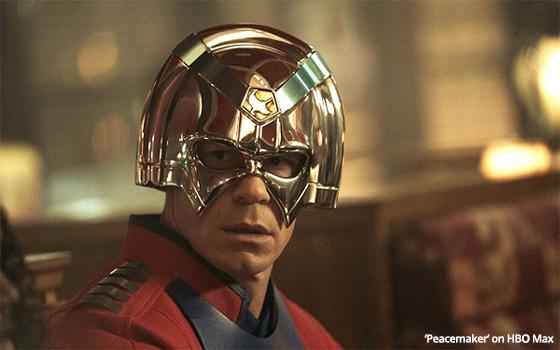 This time, the English language’s most colorful curse word is used so often in a new HBO Max superhero series that it is practically the star of the show.

John Cena might disagree with that because he is the show’s real star. He plays the superhero of the title, “Peacemaker.” He is pictured above wearing the Peacemaker’s trademark helmet.

The show is a spinoff (and a continuation of sorts) of “The Suicide Squad,” a movie released last year that featured the Peacemaker character, among others. Both the movie and the TV show spring from the world of DC Comics.

The CW is known for its plethora of DC-derived series that are understandably devoid of adult scenes and language, since they are seen on broadcast television and aimed at a young audience that includes teens.

Indeed, it is sometimes hard to imagine many of our all-American superheroes using the f-word in their common speech in the manner of us mortals.

But maybe I’m old-fashioned. The superheroes of today are often not anything like those of yesteryear. Today’s generation of superfolk seem more human, even though their powers are still super.

Evidently, the Peacemaker falls into that category. Although he is an effective superhero capable of taking on groups of foes and generally defeating them, he possesses human traits.

The way he perceives of himself and his role is the central (and darkly comic) theme of the TV show. As he continually insists, he is a peacemaker whose goal is peace for all mankind.

And yet, as colleagues and acquaintances keep pointing out, he certainly kills a lot of people violently in his quest for world peace. Needless to say, this is paradoxical.

John Cena is great in the title role, playing the character as a well-intentioned naif who nevertheless cannot avoid getting in trouble while on his peace mission. For example, as the TV show opens, Peacemaker is just getting out of prison after a four-year hitch.

Much of the show exhibits the same high quality as Cena’s performance. But hanging in the air is the age-old question of the necessity of the show’s excessive f-word use.

It is even used in an all-caps promotional slogan for the show (though it uses a device to replace the “u” with something else): GIVE PEACE A F#CKING CHANCE.

By their nature, superheroes and superhero TV shows have an attraction for non-adults -- i.e., persons under 18.

By the same token, today’s young adult cosplay culture and rabid Comic-con attendance indicates that there is an adult (i.e., over 18) audience for superheroes, even ones who spew f-words.