A Guy Rides A Buffalo Wing...Or Was It A Buffalo? 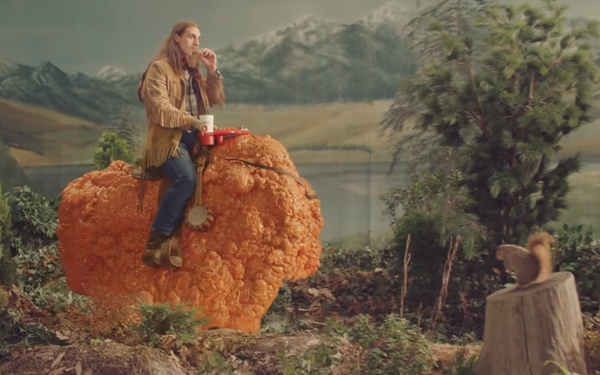 About six years ago, a group of musicians known as Jomo & the Possum Posse released a video called “Guy on a Buffalo,” that went viral, racking up some 20 million YouTube views.

Now, Zaxby’s, the Georgia-based chain of fast-food restaurants, has unveiled “Guy on a Buffalo Wing,” which is as silly as it sounds.  It features a guy riding around the forest on a giant buffalo wing. Tombras, of Knoxville, Tennessee, handles.

“One day a guy on a buffalo wing was riding around in the forest,” begins the song performed by Jomo & the Possum Posse.  The guy then stumbles upon the Buffalo Garlic Blaze Boneless Wings Meal. The man then thinks that the meal would go well with some ranch and receives some. He also sees an animatronic fox, and an animatronic hedgehog, who becomes his friend. The two go back to the Buffalo Wings, but alas, “the food was gone.”

In the end, the original guy on a buffalo appears, and the talking animals agree that the man was originally riding a buffalo, not a buffalo wing.

“Our new, bold Buffalo Garlic Blaze flavor profile was inspired by a culinary concept to incorporate aspects of spicy garlic and creamy style buffalo sauce, combining authentic ingredients such as peppers, vinegar and salt from hot sauce with fresh garlic and buttery notes to round out the flavor,” said Zaxby’s CMO Joel Bulger. “By originating the Guy on a Buffalo Wing, we wanted to generate a campaign as memorable as our new sauce.”