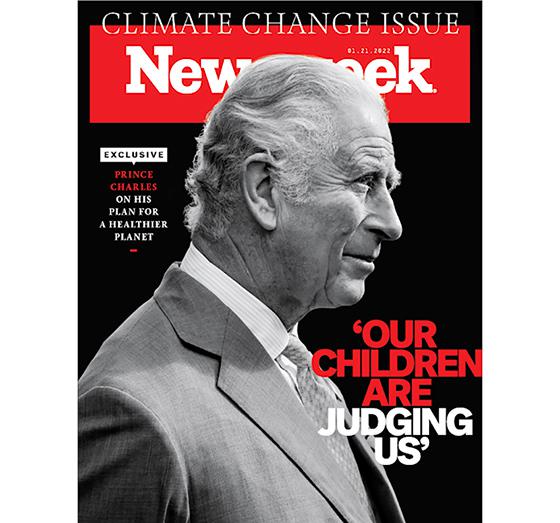 The U.K.’s Prince Charles, in this week's essay exclusive to Newsweek, offered a plan to combat climate change. In his words, we can “create a cleaner, safer and healthier planet for future generations.” The essay is the cover story for the magazine’s second issue of 2022, which hits newsstands today.

It’s been over a decade since the heir to the British throne has written a significant essay for an American publication.

Later this month, Newsweek will build on its coverage of the British Royal Family with a new podcast, “Royal Report.” It will be hosted by Newsweek's British royal correspondent Jack Royston and Kristen Meinzer, the American royal watcher and author.

In the essay, Prince Charles describes the environmental degradation he has seen first-hand on visits to Jordan, Egypt and, most recently, Barbados. He discusses his three-point plan, calling for coordinated regional and global action — including every sector of industry. “The world is on the brink, and we need the mobilizing urgency of a war-like footing if we are to win,” he writes.

He also reflects on his family's long commitment to environmentalism. He praises his late father’s concern about the health of the planet and cites the work both his sons have taken in building a sustainable future.

“We are proud to publish the Prince of Wales’ powerful appeal, calling on all of us to address this crucial challenge,” Newsweek Global Editor in Chief Nancy Cooper said. “Given his decades of engagement on this issue, he can speak with deep knowledge and real authority.”

The podcast, which begins with a frequency of every two weeks, will provide American royal watchers with fresh reporting and analysis of the House of Windsor, plus regular conversations with well-connected palace insiders.