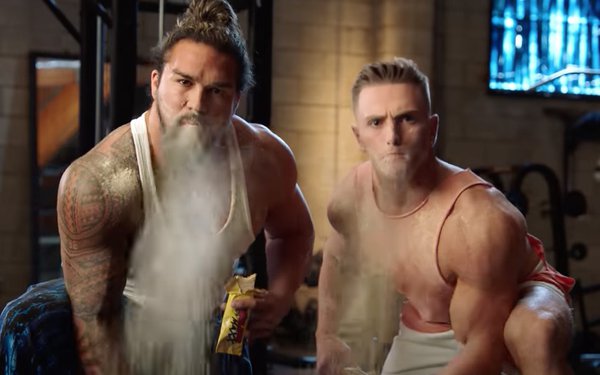 Chalk it up to taste—literally.

That’s what One Brands does in a new campaign that seeks to convince people protein bars don’t have to taste bland because of the chalky texture of competing brands.

In this spot, two stereotypical gym rats pump iron as they bromance one another using only the word “Bro.” When it’s time for a protein break, they chomp down on their protein bars and are immediately met with a chalky blast that covers their faces.

This spot shows a cycle instructor winding down a class. As she reaches for her protein bar, she too is surprisingly blasted by its overwhelming chalky texture.

Both spots end with a One bar spokeswoman exclaiming, “Don’t eat chalk,” and citing the product’s flavor, texture, 20 grams of protein and one gram of sugar.

“This campaign pokes some fun at the taste martyrs in the category who still think that they have to sacrifice their own enjoyment for a bit of protein and choke down bars that taste like chalk,” Fortnight Collective creative director Matt Kubis tells Marketing Daily.

“Our research found that while protein bar shoppers are looking for high protein and low sugar, they often feel that protein bars under-deliver on the most important factor: taste,” says One Brands head of marketing Michael Reese. “Many of these shoppers just accept that under-delivery.”

The campaign’s target audience covers a range of demographics who share a common attitude: “They strive to achieve their best every day. They live an active, busy lifestyle, and protein bars give them the fuel they need in the pursuit of their goals.”