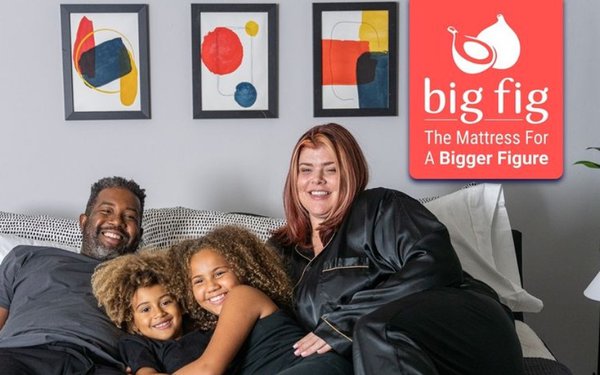 Big Fig Mattress, built specifically for plus-sized people, believes everyone deserves a good night’s sleep. With its new Big Fig Collective and a campaign called #SeeAllOfMe, it hopes to heighten awareness about those who are struggling financially, and share mattresses with those in need.

Jeff Brown, president of the Cleveland, Ohio-based company, explains what he hopes the new initiative accomplishes for the brand.

CPG: FYI:  Big Fig has been around since 2016, and customers who know it already appreciate that it’s a brand that wants bigger people to sleep better. How does this new approach build on that?

Jeff Brown: The idea is that #SeeAllOfMe reinforces our corporate mission. The more we get into marketing to this community, the more diverse we realize they are. And they often feel people don’t see who they are, beyond size. These are people with many facets -- they want people to see their full potential. So we started the Big Fig Collective to understand them better.

CPG: FYI: Who is in this collective?

Brown: No one in our senior management is plus-sized. So we invited plus-sized actors, doctors and influencers to form this collective. It’s an advisory board, and we meet quarterly about what’s happening in their lives and communities. They challenged us to be more active in helping.

CPG: FYI: How will this effort help?

Brown: We hope it raises awareness about problems  plus-size people face. They tend to be underemployed, for example, and to have more relationship problems. And we want to give away our gently used mattresses.

Like many of our competitors, customers can return our mattress if it isn’t right for them. About 6% to 7% of buyers do that. Rather than sending it out for recycling, we talk to people in our collective about donations.

So someone can say, “Hey, I’m in Utah, and I know a homeless shelter that could use some mattresses.” The idea is to build that bridge between the plus-size community and the communities they live in.

It’s hard to do on a national basis because of regulations. But on a local level, it’s a way to help our community do more, especially for the LGBTQ community, as well as those who are homeless. Both have a large percentage of plus-size people. We may not be flush with cash, but we’ve got plenty of mattresses.

CPG: FYI: Speaking of cash, how is business?

CPG: FYI: There are hundreds of D2C and online mattress companies. How do you stand out?

Brown: Yes, about 40% of mattresses are purchased online these days. We sell only one mattress, with some accessories and an adjustable base. That differentiates us.

We built it with just one purpose in mind. That’s very different than the Caspers and the Purples of the world, who simply tack a plus-size model onto their regular product lines with slight modifications. We serve an important need -- too many [plus-sized] people are buying mattresses advertised as hybrid and reinforced, [paying] up to $4,000. And then they wind up needing a new one in a couple of years.

CPG: FYI: Just over a third of Americans are obese, and another third are overweight. That’s a broad market. How do you target them in advertising?

Brown: We spend all our ad dollars -- about 22% of sales -- on the plus-size market, who see themselves as plus-sized. Would it be cool for my bottom line if I tried to reach that other third? No. We manage our costs and marketing very specifically. Because we target them more directly, we profile and understand who they are, which helps us tailor messages.

That’s true of our storytelling, too. We see ourselves as a lifestyle brand,[while] other mattress companies don’t. You see that in our marketing on social media and our fan club. We talk about how to sleep big and live big and deal with the body you’re in.