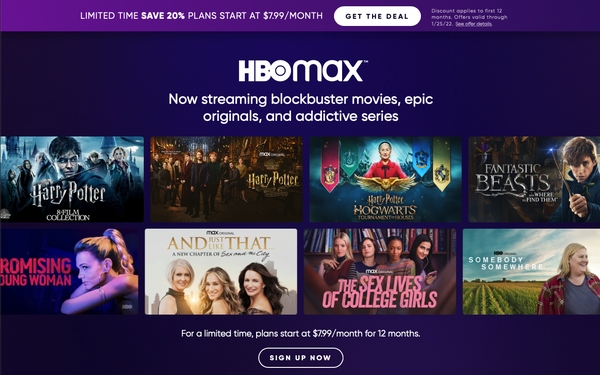 Just days after Netflix said it was raising prices -- anywhere from $1 to $2 a month -- HBO Max said it was offering a 20% discount across many of its subscription streaming options.

Price sensitivity is no joke. Consumers are well aware of what virtually all streaming services cost -- anywhere from $4.99 on the low end for Apple TV+ to a high of $19.99 a month for the 4K-enabled Netflix option with multiple TV set usage.

This $14.99 price seemed to be in the direct line of sight of Netflix executives. Late last week, the subscription video-on-demand service said it will gradually raise its price for its most widely used “standard” option to $15.49 -- $1.50 more than its current $13.99 number.

For sure, Netflix had other issues -- like raising its price to garner extra billions needed to produce new content. Still, at just 50 cents more than the highest-priced streamer out there -- HBO Max -- Netflix was positioning what the marketplace could sustain. This could be construed as a great deal, especially considering that Netflix offers more original content than many top competitors combined.

In turn, HBO Max -- still a relative newbie streamer -- might think it can endure 12 months of sharply lower monthly fees with the chances to boost subscribers. Many businesses -- especially in a startup phrase -- account for a certain level of losses in their initial years. So what’s a few more lines of red ink -- especially if you can make gains in the long run?

HBO Max, as well as its linear TV network HBO, has a lot going for it content-wise. The storied Warner Bros. studio has a massive amount of high-profile content, including DC comics content, the “Harry Potter” franchise, “The Matrix,” “King Kong” and Looney Tunes.

No doubt it believes -- along with Disney+ -- it will be a main competitor to Netflix in the years to come. That would be the main story to tell consumers -- as well as a good supporting-cast story about price.