Literary Ambitions Aside, 'Promised Land' Stands On Its Own 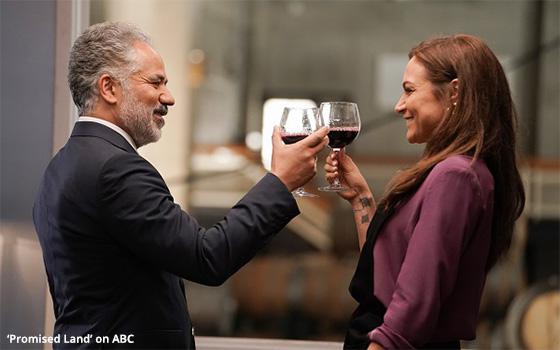 A new prime-time drama premiering Monday night on ABC that its creator says was inspired by Charles Dickens, John Steinbeck and John Ford turns out to be high-quality show in its own right.

Does the show, titled “Promised Land,” rise to the level of the two literary giants, Dickens and Steinbeck, and Ford, one of Hollywood’s most legendary directors?

That is a matter of opinion. But the truth is, it doesn’t have to. A TV show is a TV show. Inviting comparisons to the work of those three is an apples-to-oranges exercise.

That was the gist of a TV Blog last week about an unusual publicity letter emailed to journalists earlier this month from Matt Lopez, creator and showrunner of “Promised Land.”

In the letter, he stated that he was inspired to create the show by the storytelling of Charles Dickens, the subject matter of John Steinbeck and the films of John Ford.

The TV Blog offered the opinion that mentioning these names in the context of a TV show sets a standard that a TV show really does not have to meet to be critically accepted or even more important, welcomed by viewers.

“Promised Land” is a case in point. For starters, as a piece of made-for-TV storytelling, the pilot that I watched last Friday gets an A+, due chiefly to a plot twist that is revealed not with a dramatic bang, but with strategically placed hints.

The use of this method allows viewers to experience the pleasure and excitement of figuring it out for themselves rather than having it spoon-fed to them.

It is also a show about social class and grit in the face of adversity. The family behind the winery is Latin-American. They are not only presented as wealthy, but also influential in the politics of the county.

Since this is California, it should come as no surprise that the workers who pick the grapes and maintain the grapevines are by and large Latino immigrants.

Most of them are legally documented and some are not (unbeknownst to the winery’s management).

Thus, the show’s main social concern is immigration. In the show, the differences between the recent immigrants and their wealthy employers are clear to see.

Conflict arises in this area because some members of the ruling family have more empathy for their immigrant workforce than others.

Issues of social class aside, Lopez and his writers and producers have not forgotten to load up on the kinds of interlocking storylines that viewers expect in their prime-time soaps.

Secret-keeping, long-held grudges, treachery, betrayal and vengeance are all part of the mix here. By the time much of this is revealed in Episode One, you are left with the impression that this is one dysfunctional family.

As for the filmmaking, the show does fulfill Lopez’s vow in his letter to journalists that he and his team have attempted to make a TV show that is visually a cut above the usual. In this they have largely succeeded.

In interviews published recently, the showrunner and creator has emphasized that not only is his show about Latinos in America, but it is made by them too -- writers, producers and directors who are almost all Latin-American.