Publisher Or Platform? How About Just Being A Responsible Corporate Citizen? 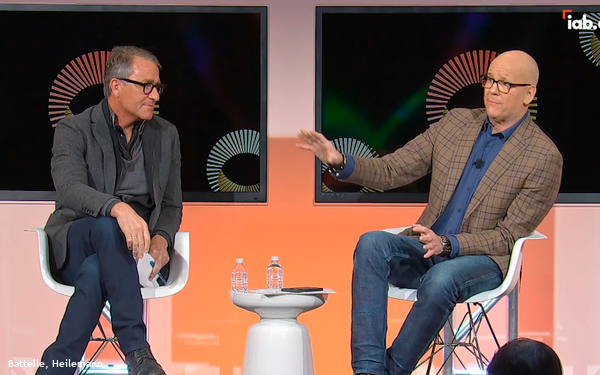 Are tech platforms publishers or merely technological conduits? It’s a debate the industry has been having ever since content first began publishing digitally, but it's escalated in recent weeks as the spotlight shifted from Facebook, Twitter and Google to, well, Spotify.

I know where I was leaning, but it was hearing John Battelle’s and John Heilemann’s conversation about it during the Interactive Advertising Bureau conference late Monday that settled it once and for all.

“If you’re paying somebody $100 million for exclusive rights to their podcast, you’re a publisher,” Recount Media co-founder Heilemann asserted during the exchange, referring to Spotify’s deal to distribute Joe Rogan’s controversial podcasts.

I agreed with Heilemann, but Battelle, also a co-founder of Recount Media, implied it’s still not that simple.

“I think Spotify did exactly what all technology companies do, which is basically to kick that problem can down the road,” he noted. The problem, Battelle added, is that Spotify didn’t consider the implications of pivoting from being a simple music streaming service to being a controversial podcast publisher.

“Not so much from the point-of-view of the law, because at least in the United States, this is not an issue of Section 230 and the CDA. It’s just not,” Battelle explained, adding, “It’s an issue of whether or not you take responsibility.”

And then he ended the debate for me, once and for all, with his next statement: “I don’t care if it’s a publication or a platform, it’s the same thing, right? Do you stand behind, and do you take responsibility for the consequences of the decisions and actions you take?

“Whether you call it publisher or platform is actually obfuscating the issue: Are you a responsible corporate citizen?”

online publishing, publishing, social media
2 comments about "Publisher Or Platform? How About Just Being A Responsible Corporate Citizen?".
Check to receive email when comments are posted.
Read more comments >
Next story loading