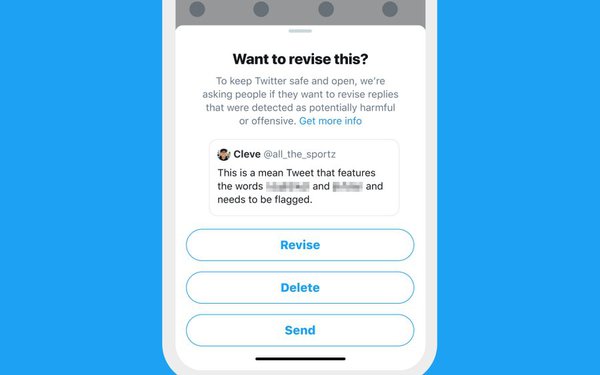 There’s a stereotype attached to Americans that has been substantiated over the past few years: We don’t know how to have a respectful and honest conversation, especially when centered on politics. This stems from our inability to witness another point of view without unleashing a counterattack. Our inflamed passion often leads to hateful, and therefore harmful, rhetoric that undermines the term “conversation” altogether.

It’s no secret that social media platforms have become a hotbed -- indeed, a battle zone -- for this cultural deficiency. There’s offensive language, petty fights, and spineless jabs between users who will most likely never meet in person. The term for this: trolling.

In May of 2020, Twitter began testing ways to cut down on harassment and toxicity among users on their platform. To do so, the company did something relatively old-fashioned: prompting users to take a breath and think about what they’re about to say.

“When things get heated, you may say things you don’t mean,” reads a company tweet announcing a limited experiment on iOS with a literal prompt that gives users the option to revise, delete, or keep their potentially harmful reply before it is published.

But would users of  a platform so full of constant insults -- some of which aren’t accidental, but thought through vindictively --  really respond to a simple prompt?

Another version of the same experiment was provided for selected iOS users last February; a new report on its findings was released by Twitter this past week.

The results were surprisingly significant, showing that 31% of users actually changed or deleted their tweets when given the chance via prompt to do so. Prompted users canceled their replies 9% of the time and revised them 22% of the time.

This online A/B experiment showed that prompting users to reconsider their potentially offensive post changed their behavior while posting -- as well as in their future postings. In other words, the change in users’ behavior persisted beyond the immediate action.

While 31% is hugely significant (imagine if Twitter could reduce its harmful content by a third?), the other 69% of tweets were sent without edits, but it’s likely that Twitter’s algorithm would have been unable to accurately assess all of these remaining replies as harmful. Therefore, the positive impact of prompts may be even higher.

It may be difficult for some people to know when to hold themselves back from sharing harmful content online. But this experiment lays out the groundwork -- a starting point -- for other platforms to consider that many users need reminders when reacting. Again, platforms like Twitter, Facebook, Instagram, Reddit, YouTube, Discord etc. have made it too easy for people to act irrationally.

With Twitter extending these initial test prompts to users in Brazil -- and to all users eventually, I hope -- maybe the millions of American users, and billions of users worldwide, have a better shot at conversing semi-respectfully, and better understanding one another.