The Attack Of The Thiel-Bot 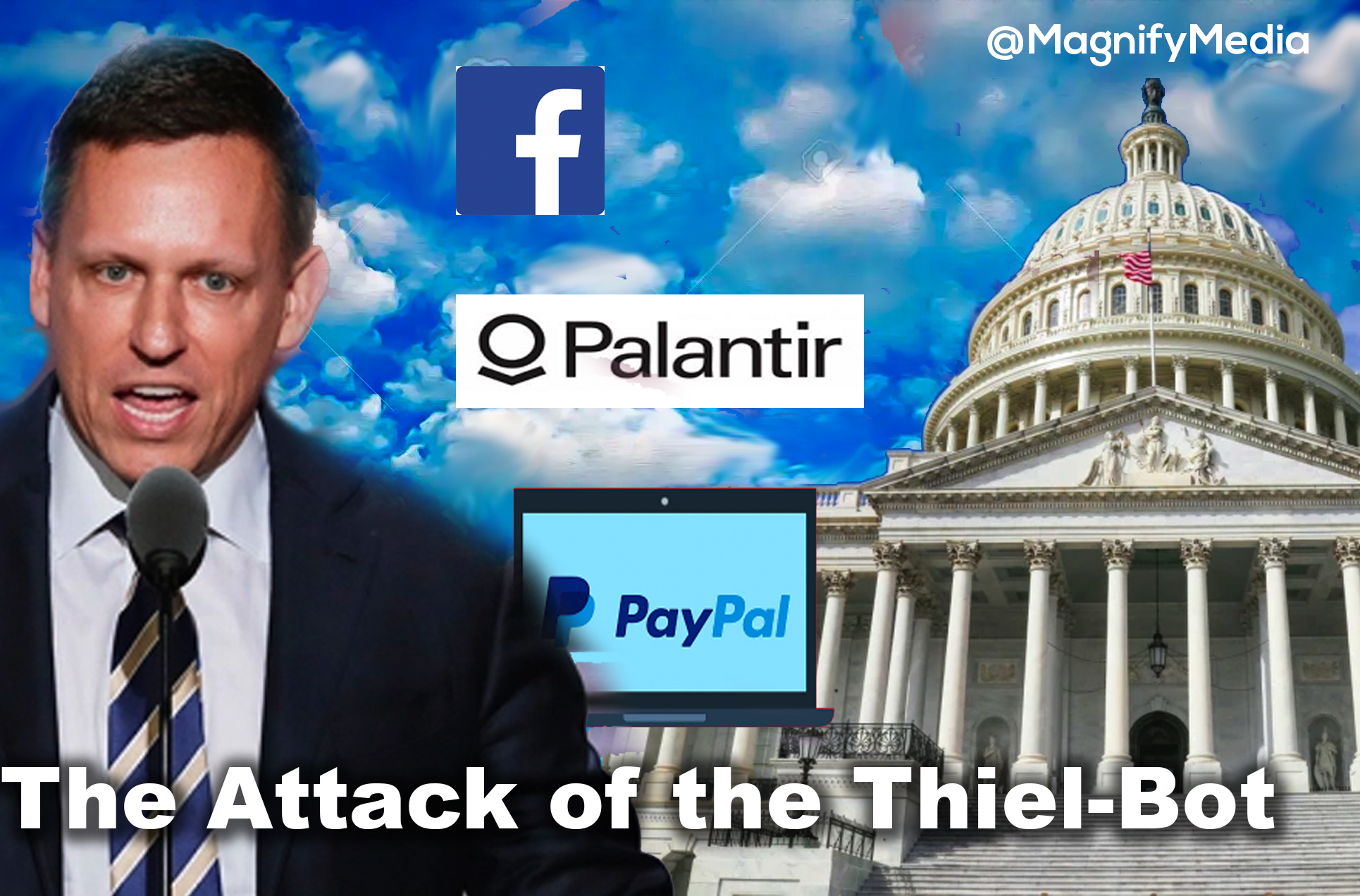 I've spent a good amount of time around people who describe themselves as libertarians. It's a bit of a one-size-fits-all political affiliation. For lots of wealthy people, it means they don't want to pay taxes at all. For some, “liberty” is a veil to hide racism or a fundamental rejection of the idea that the government should provide any resources, education, or benefits to anyone. There's a certain “every man for himself” ideology (and women, too, if they can make it up the ladder and through the bulletproof glass ceiling.)

And then, among the techno-elite, there's a strong feeling that government simply gets in the way,  and the reins of society should be handed over to science, technology, and innovation -- kind of a “move fast and break things” idea of an anti-government movement.

Peter Thiel is all of these. And that's why his rather clear determination to use his skills, money, and network to tear down democracy isn't something to be taken lightly. He's young, energetic and angry -- a right-wing billionaire set to put his fortune earned at PayPal and Facebook to work for the Trumpian political mission.

Max Chafkin's book “The Contrarian: Peter Thiel and Silicon Valley's Pursuit of Power” notes that Thiel co-founded PayPal. I'm not sure I fully understand just how PayPal made so many people rich, but it surely did. In 2000, PayPal got in business with Elon Musk. "Peter thinks Musk is a fraud and a braggart," one source tells Chafkin. Conversely, "Musk thinks Peter is a sociopath."

Then 9/11 happened, and Thiel added Muslims to his growing enemies list. Chafkin writes that Thiel panicked about "the threat posed by Islamic terrorism — and Islam itself." He created Palantir, a surveillance tech company designed to use data analytics to root out terrorists. Thiel became a contractor to big government; the CIA and the New York Police Department were early clients. Scared yet?

The gossip site Gawker began to notice Thiel, and founder Nick Denton took him on, outing him as gay. Thiel was enraged and dug deep to fund what almost everyone believed was a nuisance lawsuit against the site. It was designed to bankrupt Gawker, and it did just that.

But don't take my word for it. Thiel's opinions are pretty much transparent. Writing on the Libertarian CATO institutes blog, he says: "Since 1920, the vast increase in welfare beneficiaries and the extension of the franchise to women — two constituencies that are notoriously tough for libertarians — have rendered the notion of 'capitalist democracy' into an oxymoron."

Thiel goes on, describing a "deadly race" between politics and technology, in which human freedom is the prize. He goes on: "While I don't think any class of people should be disenfranchised, I have little hope that voting will make things better."

I met him once, at one of those only in Manhattan book parties where the crowd is sipping white wine (red could stain the carpet) and delicious hand-served hors d'oeuvres make it all worthwhile. His book was "Zero to One," and he worked the room like a skunk at a garden party. After all, he was by then a neo-conservative, and the room was full of New York liberals, his least favorite people.

This week, Facebook announced Thiel was stepping down from its board after more than 15 years. He was one of Facebook's earliest investors. It's unclear how much influence Thiel has had at Facebook. However, he was on Trump's transition team and is said to have lobbied Facebook not to limit Republicans and other often-controversial far-right voices on the platform.

The New York Times has reported that Thiel is out at Facebook in order to back Trumpian candidates in November elections, including U.S. Senate candidate Blake Masters, and “Hillbilly Elegy” author J.D. Vance, who is running for the Ohio Senate. Thiel has already contributed $10 million apiece for those candidates. And it's likely he'll back more candidates. In 2020, he funded -- to the tune of $1 million -- Kris Kobach, the anti-LGBTQ, anti-immigrant candidate running in the Republican primary race for U.S. senator from Kansas. Kobach lost.

Why did Thiel support Trump? According to the Chafkin book, one of his long-time investor/partners said of Thiel: "He wanted to watch Rome burn."

So a billion dollars buys you a lot of matches and lighter fluid.