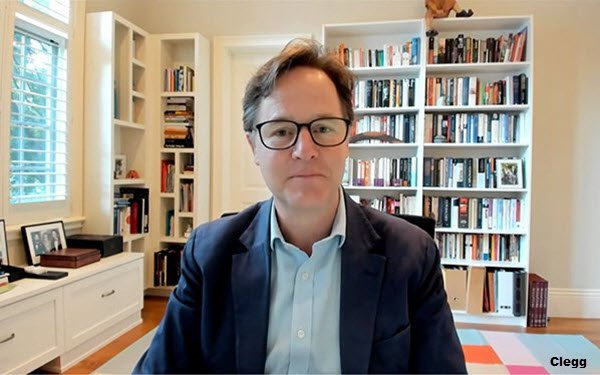 Meta CEO Mark Zuckerberg is publicly putting Nick Clegg in charge of all global policy issues, in theory allowing Zuckerberg to step back from the role of public face for the the beleaguered company and focus on product development.

In a Facebook post on Wednesday, Zuckerberg announced that he is promoting Clegg — a former British deputy prime minister who has served as the company’s vice president for global affairs and communications since October 2018 — to what is being described as a new role with a new title: president, global affairs.

With Meta intent on “building the metaverse," “this will be an exciting period of innovation," wrote Zuckerberg. "But at the same time the landscape around regulation for our industry is changing quickly.” Meta is “at the center of a lot of debates about technology and society,” he understated.

“We need a senior leader at the level of myself (for our products) and Sheryl (for our business) who can lead and represent us for all of our policy issues globally,” he added, referring to Chief Operating Officer Sheryl Sandberg.

Clegg will now lead Meta on all policy matters, “including how we interact with governments as they consider adopting new policies and regulations, as well as how we make the case publicly for our products and our work,” Zuckerberg wrote, adding that Clegg will now report directly to him, as well as to Sandberg.

The actual change in Clegg’s responsibilities appears to be nominal, however. Rather, the announcement appears to be mostly a declaration designed to let Zuckerberg — who has always appeared distinctly uncomfortable in the usually CEO-appropriate role of representing the company publicly — shift that burden to a lieutenant ostensibly more adept at taking the heat.

Critics, of course, would argue that under Zuckerberg and Clegg, the company’s policies and enforcement efforts in both the content and elections arenas have been dangerously inadequate from a public welfare standpoint, and that the oversight board is a toothless, far-from-independent body created to try to allay some of the public and regulatory pressure created by those failures.

Meta’s aggressive innovation, business policies and competitive stance have driven its phenomenal success, but those, too, now seem in question.

The danger signals on both the user-numbers and advertising front revealed in Meta’s latest quarter came on top of regulators threatening antitrust actions and pushing Meta to pay publishers for the news it distributes around the world.

As analysts have noted, Zuckerberg does very much need to focus on products at this critical juncture, as Sandberg figures out how the metaverse translates into a business model.

It remains to be seen whether Clegg, or anyone, can manage to stave off the external pressures and rehabilitate Meta’s public image to enable Meta’s global growth and metaverse ambitions.