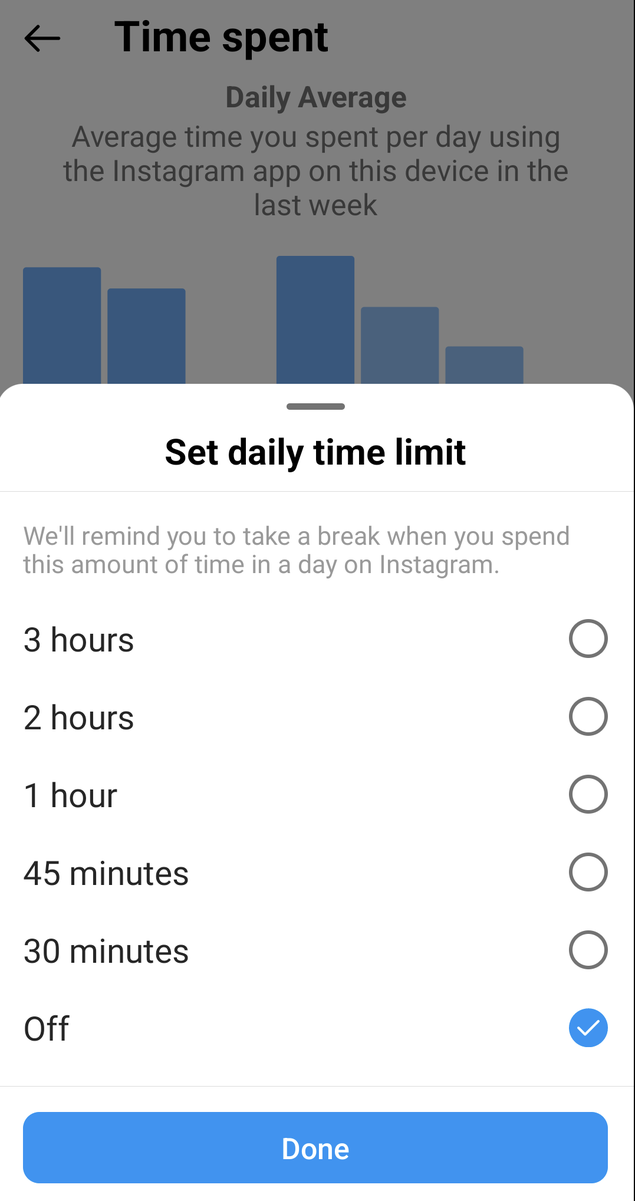 It isn’t news to anyone following Big Tech that since its shift from Facebook to Meta five months ago, Mark Zuckerberg’s company has been hemorrhaging users and market value ($500 billion, to be exact). Thus, equally unsurprising, come Meta’s attempts at preserving its user base -- no matter what.

It seems the company has gone with its tried-and-true method of manipulation.

Yesterday, TechCrunch reported that Meta's Instagram app quietly discontinued all daily app time-limit options under 30 minutes. This feature helps users keep track of how many minutes they are spending on the app per day, notifying them with an alert once they’ve reached their preferred limit –– a number, before this recent change, as low as five minutes.

This fact came to light only when a tipster sent screenshots to TechCrunch, showing that Instagram was urging them to “set a new value for your daily limit,” because “the available daily limits are changing as part of an app update.”

Notice there’s no mention of why the company is making such a seemingly arbitrary change.

The anonymous tipster had a time limit of 10 minutes per day on the app. And while this time limit can actually be kept intact, even with the update, there is now a pesky recurrent notification that indicates and instructs, “This value is no longer supported. Please edit.”

With more Instagram users thinking they’re unable to fix their time limit below 30 minutes per day, the tech giant reasonably expects more feed-scrolling and story-posting, which means more advertisements, and thus more money for the platform.

Even more ridiculous is how Meta responded to TechCrunch’s inquiry surrounding the informant’s claims. Not only did it confirm the claims, but it mentioned the importance of a newer time management feature called “Take A Break.”

“Take A Break” allows users to enable a full-screen notification reminding them to take a break from the app. While this may sound helpful –– and maybe for some it is ––the app’s “break” options may not really work to boost mental health.

The options are: “Take a few deep breaths”; “Write down what you’re thinking”; “Listen to your favorite song”; and “Do something on your to-do list.”

From light mindfulness to likely opening Spotify, to straight-up work, “Take A Break” seems to suggest that taking any of these brief (“a few deep breaths” may take just a few seconds”) actions are all users need to maintain a healthy lifestyle despite their social media addiction.

Therefore, “Take A Break” may actually be offering a false, and frankly delusional, solution to a problem they are mindfully trying to address.

While I believe people should be responsible for their own time spent doing anything, Meta's now-discounted time-limit features (which appear on other apps, and even in the iPhone settings) exist to combat the app’s sheer addictiveness. They are tools that help users of social media control their scrolling, posting, chatting, etc. -- because most of us cannot control ourselves.

It’s been proven by professionals (including Meta’s own research teams, who turned their heads away from its platforms’ damning results for teenage girls; see the leaked Facebook Papers) that the addictive quality of social media, along with the content we digest, can lead to destructive real-life symptoms.

To sneakily strip users of their ability to control their struggle with social media addiction is abysmal (though, as I mentioned above, unsurprising) behavior for a platform aimed at keeping the attention of its one billion users.