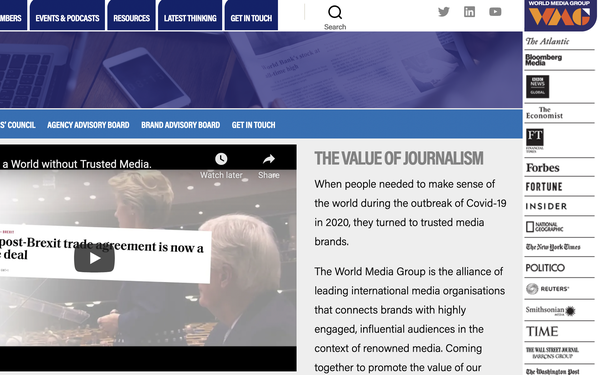 Content-led marketing budgets are expected to rise over the next 12 months, and 100% of advertisers in a new survey said they expect to maintain or increase their investments in digital media channels that they trust in the year ahead, according the World Media Group, an alliance of some of the world’s best-known media brands.

The most popular platforms for amplifying content campaigns during 2021 were digital media and paid social channels, according to the research, with each platform cited by 82% of respondents. By contrast, the open programmatic marketplace was the least-popular platform for amplifying content, with just 24% of respondents using it, although 26% of advertisers indicated they plan to increase investment in the year ahead.

The focus of the survey was on budgets and implementation strategies as the world emerges from the impacts of the pandemic. Participants included key influencers among marketers, agencies, media brands and consultancies. The survey was fielded in January and early February, and there were 262 responses: 21% were from brand advertisers, 38% were agencies, 27% were media brands, and 14% were from other types of organizations.

A major priority for marketers was the need to be “always on” for their customers, with 62% saying that’s their approach. Their most common strategy is to use brand storytelling to build long-term engagement with audiences, so that when the time comes for decision-making, the brand is already top of mind. Fifty-six percent of advertisers said they implemented this approach.

Content-led marketing, respondents said, is important for providing the right engagement and impact for brand storytelling. Advertisers rated this strategy at nine out of 10 on a sliding scale of importance, with agencies, media owners and consultants assigning the same rating.

“After a challenging couple of years for the industry, it’s encouraging to see advertisers choosing to increase their investment in content-led marketing, particularly across trusted digital media brands,” said World Media Group CEO Belinda Barker. “It is testament to the fact that, even in the ‘always on’ world, cut-through and engagement for brand storytelling can only be achieved in the right context.”

A good percentage of advertisers (41%) said they believe the content-led approach is best for building brand engagement. Among agency leaders, 37% said content can be best for changing brand perceptions. And a slightly smaller group of media owners (33%) believe advertisers can use the content-led approach to demonstrate thought leadership. Still fewer, 31%, also believe it is best for brand engagement.

Respondents differed on the essential KPIs for measuring the effectiveness of the content-led approach. For example, time spent with  content was the main KPI for (23%) of advertisers. But shifting brand perceptions is considered a main KPI by the same number of advertisers, even though they didn’t rate that as an advantage of the content-led approach. For media owners (34%) and agencies (43%) the shift in brand perceptions was the main KPI cited.,

When asked to predict the most engaging creative approaches moving forward, audio and podcasts featured strongly — notably more than AR and VR, which when compared to previous World Media Group surveys suggests a reversal of opinion. Respondents also expressed concerns about an over-cluttered branded content environment, with many respondents referencing the need for closer integration with editorial content.