The pandemic and maturation of digital channel has led to a rapid progression in the growth of retail media networks.

Amazon is a big part of this trend. If you visit Amazon’s site, you will find personalized recommendations, like “Keep Shopping For” and “Buy Again” and “Related to Items You’ve Viewed.” Amazon’s advertising revenue is now around $800 million, according to the latest reports, and it is increasingly taking share from Google and Facebook.

Many consumers start their searches with Amazon, so sellers are lining up to get placement on the site. According to Statista, Amazon generates more than 2.5 billion monthly visits, Walmart has 410 million, and Target, Best Buy, Home Depot and Lowe's each has more than 100 million monthly visits. For comparison, the most-watched TV show, “Sunday Night Football” on NBC, reportedly averages 16 million viewers per week.

But what if you’re not Amazon? Increasingly, companies are following Amazon’s lead. For instance, in early January, Best Buy launched Best Buy Ads, joining other retailers, including Kroger, CVX and Instacart, in establishing their own networks.

In February, Walmart revealed that the advertising revenue from its retail media network was $2.1 billion last year.  Walmart says it has 170,000 digital screens in more than 4,500 retail stores. 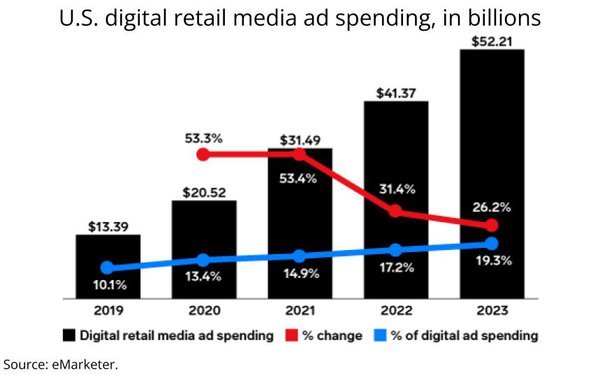