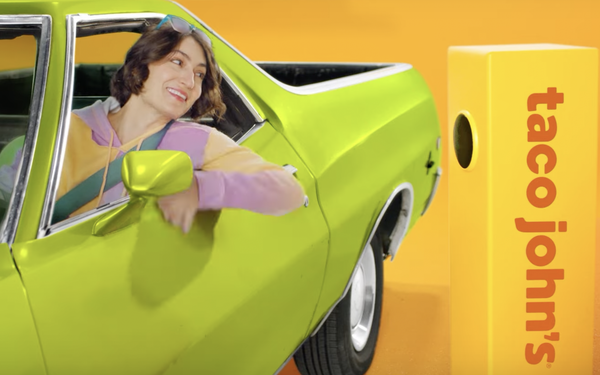 How does a QSR chain amplify and articulate a slogan like “Bigger, Bolder, Better”?

For Taco John’s, it’s turning a drive-through speaker box into a comedic character who exchanges verbal high fives with equally witty customers in its first live-action campaign in two years.

The first campaign spot from the Barkley agency is a promotion for two chicken quesadilla tacos for $5.

A woman pulls up to the speaker box and waxes on about how she loves two awesome things—a quesadilla and a taco—that are combined.

When the box responds, “Only if he likes grilled chicken and chipotle sauce” the woman retorts “Those are his middle names.”

“One of the insights that we play off of is that if you don’t shake things up, you really get stuck in neutral.”

Unique product offerings and a focus on value, quality and excitement are at the center of the verbal exchanges.

Subsequent commercials will feature back-and-forth quips between the box and a taco truck owner who prefers to eat at Taco John’s, and a man whose clothing gradually transforms into cowboy garb for a Western barbecue promo.

The speaker box isn’t supposed to be a “straight man,” but a character who can “improv it all the way up to this place that feels like you’ve come to this bigger, bolder better place to get food and create an exciting experience,” Oakes says.

On a separate slogan front, Taco John’s is using QR codes on table tents, tray liners and its website that, when scanned, give people the option of scheduling a trip to the chain in their digital calendars to indulge in Taco Tuesday.

Given things like “Zoom fatigue,” blocking out time for Taco Tuesday “would be a great way to get away from the screen and go do something else,” says Troy Burrows, Barkley executive vice president and executive creative director.

Having trademarked the term Taco Tuesday, the chain is calling the QSR initiative the Taco Tuesday Meating Maker.