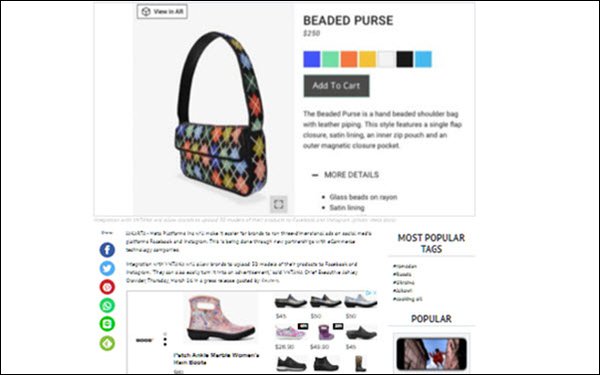 In a step toward bringing advertising into the metaverse, a new tech integration will make it easier for advertisers in several categories to create and employ 3D creative on Facebook and Instagram.

3D ads appear in users’ Facebook and Instagram feeds displaying interactive 3D models that can be tapped to enable interaction — for example, moving an image of a handbag around to view all angles.

“In a way, this offers a glimpse of what you might expect on future devices like AR glasses,” added VNTANA co-founder and CEO Ashley Crowder, noting that 3D models of products are the first step in opening up the metaverse for advertisers.

Meta first announced the AR Publishing API last year, partnering with augmented reality firms Modiface and PerfectCorp to make it easier for beauty and cosmetic brands to use 3D and AR advertising. The new partnership extends those capabilities to apparel, footwear and handbag brands.

Through VNTANA, brands can upload their existing 3D designs from programs such as Browzwear, Clo, Keyshot and Modo and automatically convert them to Facebook and Instagram standards. The 3D models can then be published from VNTANA directly to the Meta catalog to streamline 3D ads creation.

In addition to Facebook and Instagram, the files can be used for ads in other ecommerce platforms and game engines, according to VNTANA.

The two companies said they are planning to expand the integration to add more features and functions.