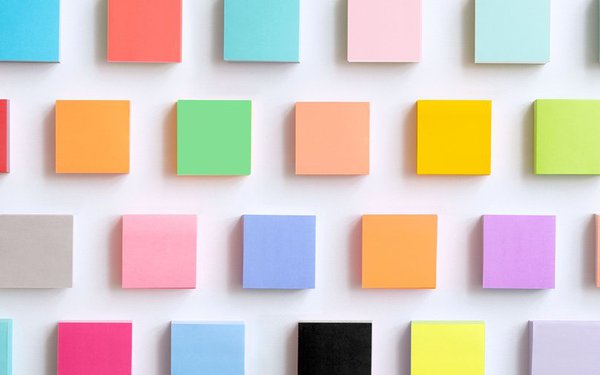 For the first time, Post-it, the beloved brand of the organized and unorganized alike, is partnering with the Pantone Color Institute. And it's hoping the launch will get it even closer to the precise color vibe of America's work-from-home confusion.

Color has always been an integral part of the brand's personality, starting with the classic canary yellow it used at launch. It's been rapidly expanding its color options since the early 1980s, spiraling into hundreds of combinations.

"We've already tried to track consumer desires and tastes to evolve the portfolio," she says. "But we want to be better able to cater to people in this time of hybrid working. We want to bring each and every person colorful options to spruce up their desks at home or in the office and for school."

The hues include 11 new and refreshed collections, ranging from the powerful brights of Summer Joy to soft neutrals found in the Simply Serene collection. And for the first time, Post-it is giving consumers the name of each color in a collection. Simply Serene, for example, contains First Snow, Pink Salt and Black Onyx. (Green admits that last color is a little polarizing. "Some people love it, and others just think, 'How am I going to write on that?'")

The decision to team up with Pantone was an easy one, she tells Marketing Daily. "We've partnered with them for smaller programs. We love color. They love color. So this was probably overdue, and a chance to work together in a bigger way, looking to use color in ways that communicate, spark creativity and increase productivity."

Green says sales have been up ever since the pandemic began, and people continue to struggle to keep work, home and school paperwork from running into each other.

A year ago, the company launched the Post-it app to make digital brainstorming sessions more effective -- and more colorful.

It turns out that the moment a customer stands in front of a shelf at a retailer, it's a bit of a Rorschach test. "Do they want a neon to break through the clutter at home? An energy boost? Do they want something to blend in with the environment? Are they craving subtle neutrals? Are they using it to reinforce the way they communicate with their children?”

Green says the brand essence -- simplicity -- is even more relevant right now, as people increasingly focus on feeling organized as a component of mental health. And simply slapping a new color of a Post-it on a stack of bills feels like an act of organizational coup.

"We're very focused on putting the consumer first, and keeping everything simple," she adds. "Anything that seems like it might complicate the brand? We say no."

3M is promoting the new colors through an influencer campaign, along with organic social media.