The Supply & Demand Of The 'Crazy-Side Platform' 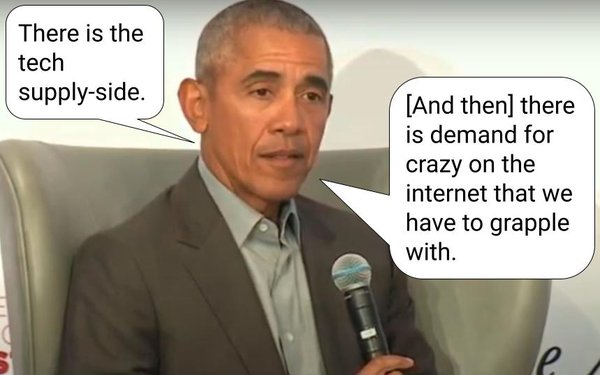 Listening to President Barack Obama speaking about the role of media disinformation during The Atlantic's conference on that subject Wednesday made me think he's been reading MediaPost. Or at the very least, talking to some supply- and/or demand-side folks in our industry, because that's exactly how he described the problem.

While he didn't actually use acronyms like SSP or DSP, he made the case that the supply-side of disinformation is comprised of social media and tech platforms that have built it into their "product design," because it "monetizes anger, resentment, conflict and division."

"That's on the tech supply-side," he said, adding, "I do think there is demand for crazy on the internet that we have to grapple with."

That made me think we should start using a new acronym, the "CSP," or "crazy-side platform," because that's what social media and advertising and media tech have done, effectively fulfilling the demand for people to go crazy.

To be fair, Obama didn't lay all the blame on media technology, noting that divisions have always existed in society, but he made a strong case that technological advances have accelerated it by enabling bad actors to amplify misinformation to become "disinformation," and in the process, make more people crazy.

Noting that as much as 40% of the country still believes Joe Biden was elected president "fraudulently" and that a similar percentage are against COVID-19 vaccines, even though they already been tested on more than a billion people, proven to be safe and have saved people's lives.

The problem he said isn't technology, but that our institutions -- especially our laws and norms regulating the spread of harmful information -- haven't kept up.

He predicted it would take several years for U.S society to establish new laws and societal norms for regulating disinformation, and that he for one has made that a big part of his own foundation, which is focusing on giving young people the tools and skills to help figure it out, not just in America, but worldwide, because disinformation isn't just a U.S. issue, but a global one. (Think Russia and Ukraine, as an example."

In terms of explicit regulations, Obama said he doesn't necessarily think that Section 230 rules protecting social media and tech platforms from the liability of what people say on them should be completely repealed, but he did think it shouldn't extend to advertising.

"I certainly think providing Section 230 protection from liability for paid advertising that is micro-targeting certain groups, and we have no transparency in that, is not serving any benefit."

By and large, Obama was mostly making a case for greater transparency among Big Tech operators, and not necessarily a fully public one, but at least one in which expert authorities can assess the health and safety of what they do.

He likened it to government "meat inspectors" who do their job without the general public understanding exactly how they inspect and determine the health safety of it, but that we at least have regulatory standards knowing they do.

Asked when he understood exactly when weaponized disinformation became a threat to U.S. democracy, Obama implied there wasn't a single inflection point.

"It’s weird to remember that smart phone came out in 2010," he noted, adding, "I mean it’s been 12 years since this ubiquitous thing came out."

He said the exploitation of technology to disseminate disinformation evolved, that the his campaign could see a "direct line" from Sarah Palin to birthism to Obamacare "death panels" and so on to "what's been called 'truth decay'."

He said that decay was "pre-social media" and began with an "erosion of accountability for norms and standards in political life," and that social media just enabled it to spread and accelerate.

"I wouldn’t say that even by 2012 social media was the main carrier," he said, adding, "I think it was in my second term that you start seeing not just bad information, but you start seeing an acceleration of misinformation and by 2016, that’s when – well, we know what happened."