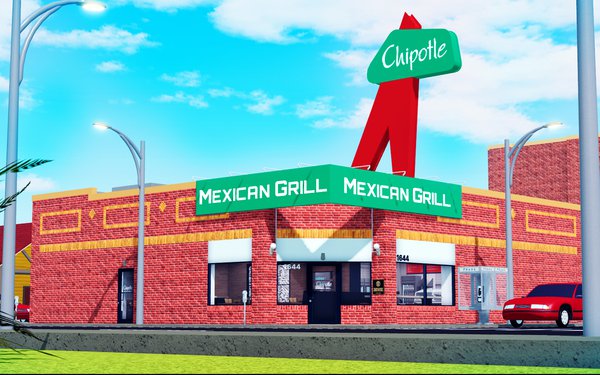 When it comes to games in the metaverse, Chipotle isn't playing around. Its recent Chipotle Burrito Builder on Roblox scored 1.1 million gameplays in less than 24 hours, with up to 27,000 people playing concurrently. And the 100,000 codes it offered got snapped up in 30 minutes.

We asked Tressie Lieberman, vice president of digital marketing of the Newport Beach, California chain, to explain why the brand is so eager to get to know Web 3.0.

QSR Land: The Burrito Builder is Chipotle's second trip to the metaverse. Last fall, you did a Halloween activation called the Chipotle Boorito Maze. Right now, the metaverse is sort of a big digital playground. What are you hoping to learn?

Tressie Lieberman: We base everything we do on delighting our community first, and keeping a relationship with them. But second, we're also learning. With the shift to Web 3.0 and the metaverse, we need to find out how best to show up there. The October Boorito experiment went so well, which gave us some insight -- and since then, we've been listening. We know people want to have fun with gamification around food. This seemed like a good next idea. It's difficult to roll a burrito!

QSR Land: How did you set this up differently?

Lieberman: People can play this all the time, while the Halloween game was a one-time thing. With this one, we'll be able to keep adding on to the experience, release additional virtual items and keep it fun and light. We want to ignite the fandom. And we can keep learning, which will inspire us about what to do next.

QSR Land: Do you view this audience as a small group of early adopters?

Lieberman: No. Roblox is not in its early days. It has the same level of users that you'll see on TikTok. For our Boorito Maze, we had 8.8 million gameplays and 5 million unique users. So we know there is scale.

QSR Land: There's been some research that people don't want to see brands in the metaverse. Does that concern you?

Lieberman: We didn't want anything that felt like an ad. We wanted something that people would genuinely want to play. This is about a cool, unique experience for our fans. Even before we began, we knew that people on the platform were open to Chipotle. Some were even using our name in their avatar name.

QSR Land: The metaverse is famously ill-defined. How do you see it?

Lieberman: We think of it as a new community, almost like a social platform. So think about something like TikTok, where you can see millions of people talking about Chipotle. It's where they're spending their time. It's a place for entertainment, and there's an opportunity to create a connection. And we see the same thing happening in Roblox. It's very much a community, and we have fans there. So it's just a place people are connecting, although in a different way.

There are many layers. It could be through VR or more traditional gaming mechanics. But it's early days, and we'll see it evolve. The important thing is showing up in a way that feels authentic to that platform and community. It shouldn't feel like an ad or an experiment.

QSR Land: But right now, it's all kind of an experiment -- and I expect many brands will get it wrong. How forgiving do you think early metaverse explorers will be?

Lieberman: You do want to show up in the right way. I would never launch on a platform if the idea wasn't right or wasn't grounded in something we'd heard from the community. And customers aren't going to think, "I don't like this campaign." They don't think in terms of campaigns at all. They're living their lives. And if you can find a way to complement their lifestyle, be a part of that journey, that's great.

QSR Land: Fast-food brands are eager players here. What other categories do you expect to see doing more with Web 3.0?

Lieberman: Fashion, sports, music and food are all huge drivers of culture. Those are the categories that inspire people and get them talking.

QSR Land: How about health?

Lieberman: Alo Yoga has a cool activation on Roblox, really leaning into meditation. The bright side of this space is that it can help with loneliness and mindfulness, Lots of times, new technology can induce fear. But I look at the other side, the opportunity to help shape the future. That's the responsibility of brands.