Bringing Clarity To The Future Of Multiple Media Currencies

On Wednesday, the second of the three-day ARF conference, the problem with the term “impressions” and how to embrace a media-buying future with multiple currencies, became even clearer.

Once again “attention” metrics were front and center, as well as whether “attention” could itself be one of the potential new multiple currencies.

VideoAmp Chief Measurability Officer Josh Chasin indicated: “One consumer ‘exposed’ (level and how not defined) to one creative, one time.”  This is certainly a persons-based measurement and traditionally this would reflect what has been known as an “OTS” or opportunity-to-see an ad or media content.

Samba TV Vice President Measurement Products Cole Strain posited: “Human sees ad.”  This must be interpreted as an “eyes-on,” which is also considered an attention measure.

Also, persons-based but a metric of higher value than OTS.

This interpretation is clearly a proof-of-play measure based on whether an ad’s creative was rendered on a screen, printed, or played.  However, it also is a device measure that reflects the Media Rating Council’s (MRC) “viewable impressions” standard, which has no measured audience dimension.

Havas’ Waite must have been beaming.

Personally, I having long suggested the term “impressions” has not only become nebulous, but is often deliberately misleading.

Here’s simple way of thinking about the evolution of media currencies:

They could each be measured based on attention, but critically the measures would reflect different drivers of attention, their attributes, and circumstances.

I believe VideoAmp’s Chasin channeled the late industry guru Erwin Ephron with his statement: If an attention measure “based on ads is driven primarily by creative, it should not be used as a media metric.  Attention measures for media content adjacent to ads should be used as the media currency.”

This difference, and its importance, was echoed by both advertisers and media sellers who generally agreed media and ad currencies measure different elements and influences of a campaign.

PepsiCo Head of Consumer Insights & Analytics Kevin Moeller acknowledged both publisher content and creative need to be measured separately, but could be based on the same technique.

At Paramount, COO of Advertising John Halley acknowledged the move to multiple currencies and the complexities of interoperability across all the players.

He also asked, who would establish the conversion matrix for a potential “common currency.”

I would suggest, the ARF’s Coalition for Innovative Media Measurement (CIMM) perhaps?

During panels discussing, “The Value of Time in Advertising,” ARF Chief Research Officer Paul Donato underlined some current benchmarks: 1) There is little relationship between the effects of time of exposure to an ad and its outcomes; and 2) attention measures are better for measures of ad effectiveness allowing for different environments.

The ARF’s Donato emphasized research has consistently shown ad effects are driven primarily by creative (50-70%), with media contributing 20-30%, and 10-20%  attributed to “other.”

MediaScience CEO Duane Varan insisted that, based on extensive research, the focus on attention, while exciting, is completely misplaced and we should “understand attention from the perspective of inattention.”

If you are struggling with all this, you should pay attention to an ARF expert roundtable revising and updating its 2003 “Media Model.” It will help explain the various levels of measurement, and terminology appropriate, in following an ad and its resulting effects over the long journey of a brand campaign. 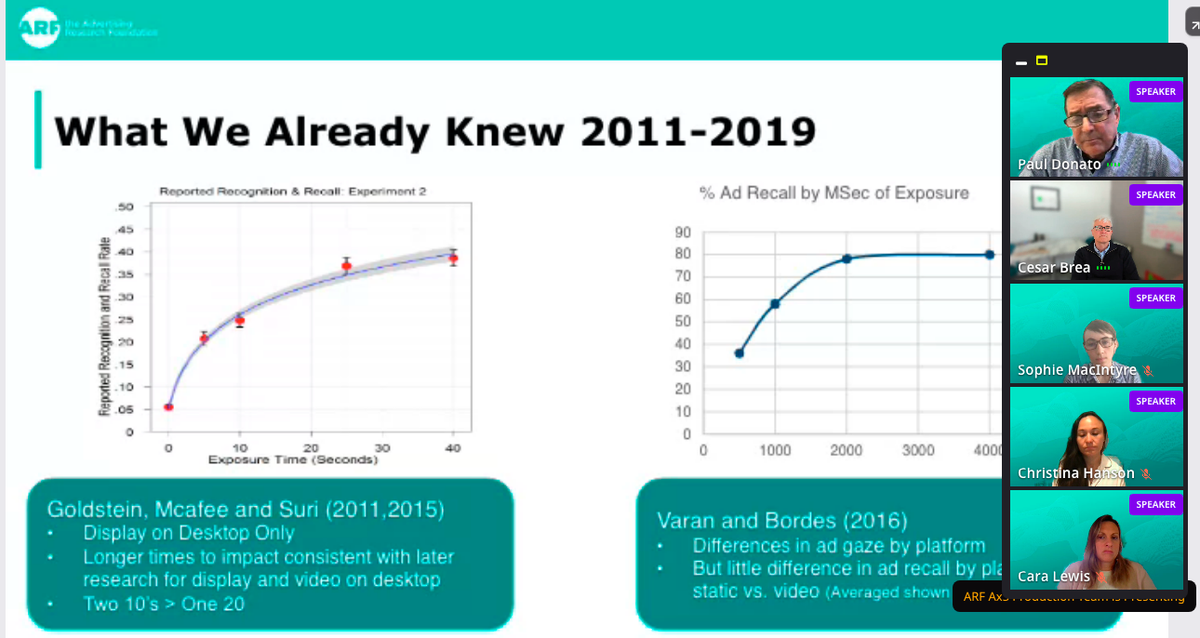