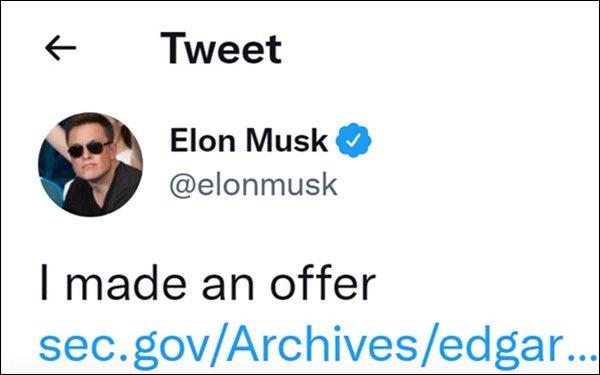 In a letter sent to Twitter Chairman Bret Taylor and disclosed in a securities filing, Musk wrote: “I invested in Twitter as I believe in its potential to be the platform for free speech around the globe, and I believe free speech is a societal imperative for a functioning democracy. However, since making my investment I now realize the company will neither thrive nor serve this societal imperative in its current form. Twitter needs to be transformed as a private company. As a result, I am offering to buy 100% of Twitter for $54.20 per share in cash, a 54% premium over the day before I began investing in Twitter and a 38% premium over the day before my investment was publicly announced. My offer is my best and final offer and if it is not accepted, I would need to reconsider my position as a shareholder. Twitter has extraordinary potential. I will unlock it.”

Twitter released a statement confirming receipt of the “unsolicited, non-binding” proposal from Musk and saying that Twitter’s board of directors “will carefully review the proposal to determine the course of action that it believes in the best interest of the Company and all Twitter stockholders.”

Musk — the Tesla and SpaceX CEO who this year bumped Amazon’s Jeff Bezos to become the world’s richest individual, according to Forbes’ billionaires’ list — has long been a Twitter critic, but has been generating headlines, and angst within Twitter, with his recently more aggressive stance.

On March 24, Musk polled his Twitter followers as to whether they believe that Twitter “rigorously adheres” to the principle that “free speech is essential to a functioning democracy.”

On March 26, he followed up by tweeting: "Given that Twitter serves as the de facto public town square, failing to adhere to free speech principles fundamentally undermines democracy. What should be done?”

At that time, in what turns out to be a spot-on observation, Wedbush analyst Dan Ives predicted that Musk’s stance could eventually lead to “some sort of buyout.”

On April 4, Twitter shares leapt more than 25% after it was revealed, via a Securities and Exchange Commission (SEC) filing, that Musk had accumulated nearly 73.5 million Twitter shares, for a 9.2% stake — making him the company’s largest shareholder.

The following day, Twitter announced that Musk would become a board member (contingent on a background check and formal approval). Twitter CEO Parag Agrawal tweeted that Musk is “both a passionate believer and intense critic of the service, which is exactly what we need on @Twitter, and in the boardroom, to make us stronger in the long term,” adding: “Welcome Elon!”

Days later, on April 10, Agrawal was forced to announce that Musk would not be joining the board after all.

Musk’s reasons for the reversal were not publicly revealed. However, analysts noted that Twitter’s board members are not allowed to own more than a 14.9% stake in the company.

The reversal “spares the company from having to deal with a renegade director tweeting about board-level discussions,” which “would have been untenable,” Gordon Haskett Research Advisors analyst Don Bilson wrote in a note following the turnabout. “The flip side to this is TWTR must deal with a wild-card investor that already owns 9% of the company and has the resources to buy the remaining 91%. As volatile as Musk is, we could see a move like that made shortly. Or we could never see it all."

Earlier this week, the drama continued as a group of Twitter shareholders sued Musk, claiming he violated the legal requirement that investors must inform the SEC within 10 days when they acquire a greater-than-5% stake in a public company.

The suit accuses Musk of putting shareholders at unfair disadvantage, claiming that he improperly delayed disclosure of his increased stake to allow him to buy more Twitter stock at a deflated price during the time between when he passed the 5% stake threshold and when he disclosed it. Such disclosures predictably trigger a jump in stock price. Experts interviewed by The Washington Post estimated that the delay may have enabled Musk to make about $156 million.

Musk started buying Twitter stock in January, and allegedly hit the 5% mark on March 14. If so, he should have filed notice with the SEC by March 24.

Twitter could move to enact a “poison pill” strategy to ward off a hostile takeover. But as Gordon Haskett’s Bilson observed after Musk dropped his bid for board membership, it might be wise for Twitter to “keep that arrow in its quiver” as a last resort, because such a move could intensify Musk’s anger and trigger unpredictable moves. “I don’t think anything is off the menu with this guy," Bilson said.

Musk has continued to troll Twitter on its own platform, even suggesting that its offices should be turned into a homeless shelter.

Musk has said he is a registered independent and has described himself as “fiscally conservative and socially liberal.”

However, if he controlled the platform, his ostensible reason for trying to buy Twitter — defending free speech — might mean  abandoning moderation efforts.

That would be welcomed by the right wing, but feared by many liberals and moderates who contend that platforms must not be allowed to let dangerous misinformation damage democracy and incite violence.

After the announcement that Musk would join Twitter’s board, Fox News declared that this had “cheered conservatives who consider social media hostile territory, and alarmed liberal elites who have often been targeted by the cheeky entrepreneur.” Twitter's ban of Donald Trump after he continued to post provocative messages following the Jan. 6 insurrection at the Capitol outraged his base, and Fox fanned the flames.

Musk, who has 81 million Twitter followers, has used the platform  “to spread baseless allegations” and has “proven to be keen on collecting massive amounts of data,” wrote MSNBC’s Ja’han Jones, adding that Tesla has faced “a spate of racial discrimination allegations.”