The Carbon Edition Of Publishing Insider 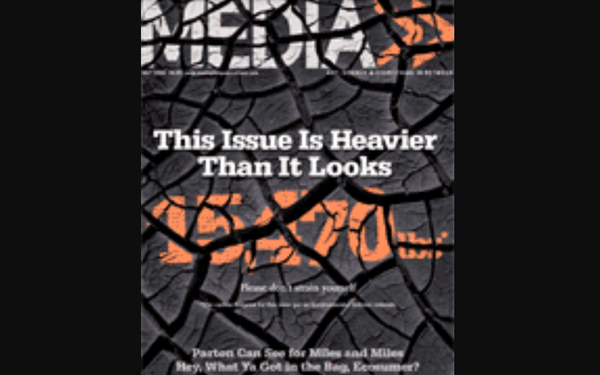 The good news is that an important new climate change report finds there are still things we can do to limit global warming. The bad news is the word “can,” which should be replaced by “will.” As someone who has worked with scientists to understand the role media plays in influencing whether people actually will, I know it’s not easy to change human behavior, especially on the kind of global scale we will actually need, but that doesn’t mean we should throw our hands up in the air either.

Since MediaPost is a trade publication, and this column is written for publishing industry professionals, I’d like to take the opportunity to ask you to think about what you will do. Because as overwhelming – and inevitable – as the climate change crisis might seem, there actually are things you can do. Even if they’re just small steps. Take them and move in the right direction.

Fourteen years ago, we published our “carbon” edition of MEDIA magazine, explaining the role media can and does play in influencing climate change, including both direct and indirect ones. Among other things, we used a carbon calculator to drive the point home, explaining to readers that the 5.8-ounce print edition they held in their hands while reading it was equivalent to 1.031 pounds of carbon dioxide that went into producing it.

While we did not calculate the carbon impact of the digital version of the edition, we noted how various digital publishers were beginning to think about their carbon impact, including Google, which turned its stark white search query page black for one day to make a point about the relatively higher carbon impact of the backlit energy consumption going into a white vs. a black web page.

As we enter a new era of Web3 digital publishing in which energy-intensive blockchain, crypto, NFTs and metaverse renditions will increasingly have potentially even greater environmental impacts, I think it’s worth at least pausing and thinking about the unintended consequences of that.

I recently listened to a top cryptocurrency exchange executive speaking about a vision in which every person on the planet effectively is their own NFT. He left out the part about how many kilowatt hours go into the creation of a single NFT -- and the fact that there are nearly 8 billion people on the planet.

And given the number of potential marketing opportunities involving NFTs, I full expect the multiple to be considerably higher than that over time.

The good news is that the Web3 industry has been working hard to address that issue too, especially the crypto developers that are the main source for creating NFTs like Ethereum, which has been working hard to move from the ridiculous energy-intensive “proof of work” model of crypto creation to a far more environmentally friendly “proof of stake” model. That shift is expected to be completed this year, and maybe as soon as June.

These are small but important steps for curtailing digital publishing’s impact on global warming.

This week I also received a press release from the U.K.’s Association of Online Publishers announcing it was becoming the first publishing industry trade body to begin streaming images on its website that cut their internet carbon emissions.

While the AOP’s website isn’t exactly the biggest offender in terms of web traffic or energy consumption, it is making the move to encourage its members, as well as the publishing industry at large, to “explore and adopt similar solutions.”

The AOP shift, which is being powered by adaptive streaming technology developer SeenThis, will make its images load faster, consume less energy, and create a better user experience to boot.

“Initial results have seen AOP reduce its data usage by 65% – greatly exceeding original predictions of 40% – and improve its website image load time by 65-85%,” the association stated, adding that it plans to implement it into richer content and video streaming in the near future, as well.

“Near future” is probably the most important part of that statement.

Friday will be the 52nd anniversary of the first Earth Day, which was also the first event to get me thinking about the role people – especially people in the media industry – play in sustaining this planet.

I’m publishing the column today, because I happen to be filling in for "Publishing Insider" columnist Tony Silber, but it’s okay with me if you start taking steps right now.

There’s no reason to wait the rest of the week.