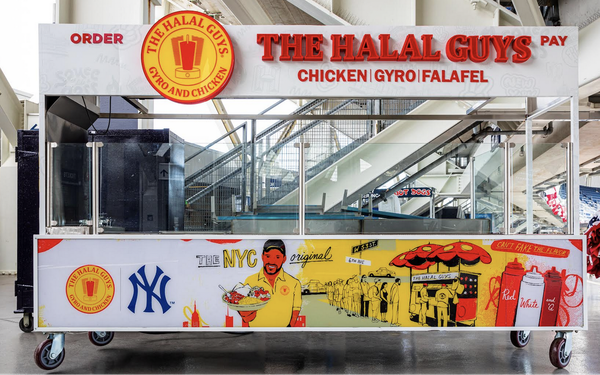 The Halal Guys began in 1990 with a street cart in Manhattan and has since expanded its restaurant presence to 17 states—with plans for three more this year.

The carts debuted the first week in April bearing an “upgraded, urban-design concept” from the Rubber and Road creative agency.

The Halal Guys were contemplating a Yankees partnership back in 2020 before the pandemic reduced the number of at-home games and their attendance, according to vice president of marketing Andrew Eck.

“The vast majority of our marketing efforts have been very specifically dedicated around driving trial and store visits—with less of a focus on overall brand awareness.

“Going into this year, we made a concerted decision to not only continue to drive-to-store campaigns but have a bigger emphasis on building brand awareness.”

In-stadium ads for The Halal Guys will extend beyond the seating area to include placements visible on TV.

“We’ll have videos that appear on the scoreboard, and there’s two outfield LED panels where all of our brand assets will be visible,” says Eck.

The two carts—which will be stocked with food cooked in stadium kitchens—reflect the “reimagining of our in-store design concept” that was unveiled last summer in Colorado,” he adds.

“It pays homage to our brand’s beginnings here in New York City while looking through a more modern-day lens.”

After Eck posted news of the three-year Yankees partnership on LinkedIn, “I cannot tell you how many other North American sports franchises have reached out about partnerships.

“It’s a heavy lift both contractually as well as the activation of the partnership. We are certainly vetting some of those opportunities, but I would say there’s nothing imminent.”

The chain expects some of the partnership costs to be offset by cart proceeds—sales “that we otherwise obviously would not have had.

“With the remaining dollars, we probably would have spent it on traditional social media ad campaigns and things like that.”

The Halal Guys plans to expand to Missouri, North Carolina and Ohio by year’s end.