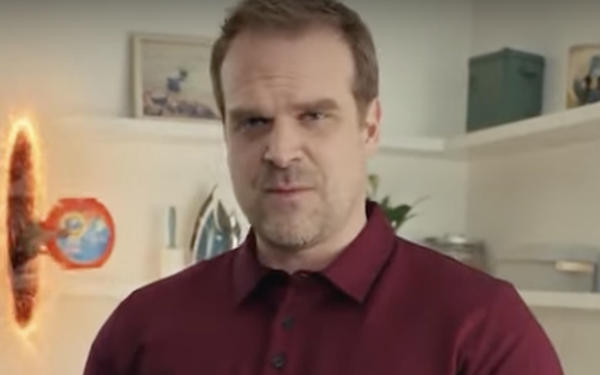 Tide, once a stalwart of straight-up advertising, has loosened up in recent years. In 2021, the brand ran a Super Bowl ad in which a mom asked her son to wash his Jason Alexander hoodie. That led to a 60-second montage of the hoodie being sat on and stepped on, all while the picture of Jason Alexander’s face showed more and more disgust.

More recently, the brand ran an ad with Stone Cold Steve Austin and Ice-T as cold callers on behalf of Tide.

Now, the brand has dropped a short featuring David Harbour. Harbour doesn’t appear in the film "Doctor Strange 2," though he has appeared in other films within the Marvel universe ("Black Widow"). Nevertheless, this video is billed as a “Dr. Strange 2 teaser” and does include a neat special effect (someone’s hand stealing the package of Tide). The plot of the ad features Harbour bemoaning a stain on his shirt and then debating with himself what kind of stain it is. (He decides that it’s strawberry jelly.)

But then when Harbour announces he has the “perfect thing” for it, the hand swipes the Tide. “Strange,” says Harbour, promoting both the movie and Tide.