Meta Sued Over Ads For Knock-Offs 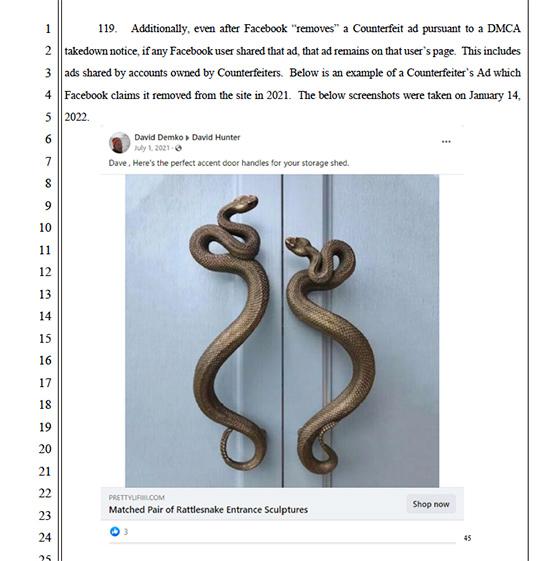 An artist who sells sculptures of snakes is suing Facebook parent Meta for allegedly allowing counterfeiters to advertise fake versions of her work.

In a class-action complaint brought Friday in U.S. District Court for the Northern District of California, Jennifer Cook, who markets her work at Snakearts.com, alleges that counterfeiters use photos from her website to create ads for knock-offs of her sculptures.

The counterfeiters allegedly post those ads to Facebook, which then draws on “granular statistics” to target those ads to a “revenue inducing audience.”

“Facebook’s powerful ad tools and lax enforcement helped it become the preferred platform of shady affiliate marketers that target people with scams and use false claims and infringing photographs to entice users to pay for products that never arrive or are far from what was promised,” Cook alleges.

“This is ruining creators’ ability to publish their work out of fear that it will be immediately ripped off,” she adds.

Her claims include copyright infringement and false advertising.

The Digital Millennium Copyright Act's “safe harbor” provisions protect website operators like Facebook from copyright infringement liability, provided a few conditions are met -- including that they take down material upon request.

Cook says in her complaint that even when Facebook removes particular ads, other ads with the same infringing images “will pop up on the site.”

But judges have effectively ruled in the past that the Digital Millennium Copyright Act only requires websites to take down material at the specific location or URL flagged by the content owner -- as opposed to policing their sites proactively for infringing material.

Content owners criticize that “notice-and-takedown” system, arguing that it requires them to constantly police online services and send multiple notices for the same content.

Some of those critics propose that Congress should instead adopt a “notice-and-stay-down” system.

Lawmakers haven't done so, but are currently considering a bill that would require web companies to use technical measures to filter out infringing material.

Cook also alleges that Facebook failed to remove accounts she identified as infringing.

He says while web companies are supposed to issue “strikes” against infringers, and enforce a policy to deal with repeat infringers, the law doesn't mandate a “one-strike-and-you're-out” approach.