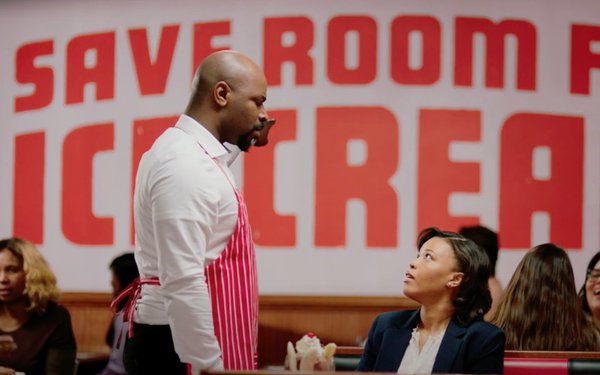 Friendly’s is putting ice cream front and center in diners’ minds in the first advertising campaign for the 87-year-old chain since it was acquired by Amici Partners Group in 2021 after declaring bankruptcy.

Titled “Save Room For Ice Cream,” it’s a hard-and-soft approach aimed at reminding people that every meal at a Friendly’s should end with a sweet, creamy treat.

The campaign spots are fronted by actor Larese T. King, who portrays a stocky Friendly’s server who alternates from seriously stern to overly nice in his encounters with customers.

In this commercial from the Erich and Kallman agency, the server overhears a woman say she’s considering having another lobster roll.

Enter the stern server, who plops a banana split sundae on her table and points to a wall emblazoned with the words “SAVE ROOM FOR ICE CREAM.”

When the woman says, “Actually, I think I’ll save room for ice cream” he responds “I knew I liked you!”

Similarly, the server imposes a pledge on four kids in soccer uniforms in which they swear to save room for ice cream—or else be banned from Friendly’s forever.

“What we love about him is his ability to go from comedically intimidating to warm and lovable in an instant,” Friendly’s CMO David Ellis tells Marketing Daily.

After Friendly’s was acquired in the fall of 2020 in the midst of the pandemic, the chain reintroduced nostalgic menu items in limited offerings. But dessert is still an enduring part of its heritage.

“We think it’s a great campaign because it says to do both: enjoy your favorite menu item—or maybe a new one—but also make sure that you save room for ice cream at the end," says Ellis. “About two-thirds of our checks in the restaurant have an ice cream on them. So that’s a big part of what led us to ice cream being our calling card.”

Friendly's has 130 restaurants located primarily in the Northeast.