On Eve Of Twitter's NewFront, Coalition Calls On Advertisers To Back Musk Pledge 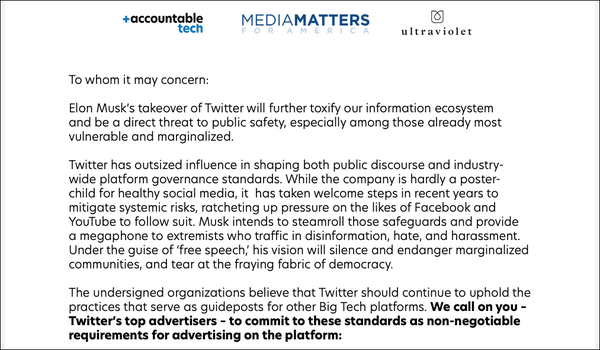 With Twitter poised to host its annual NewFronts pitch to advertisers Wednesday, the presentation is drawing extra attention from ad executives, as well as a coalition of advocacy groups, in the wake of Elon Musk's acquisition of the social media platform.

While speculation is rampant about whether Musk will make an appearance and/or a statement about his intentions for Twitter, the coalition of 26 organizations spearheaded by media industry watchdog Media Matters for America, is calling on Musk to pledge to uphold "three nonnegotiable standards of community trust and safety," or risk a call to advertisers to pull their spending from the platform:

“Your brand risks association with a platform amplifying hate, extremism, health misinformation, and conspiracy theorists," the coalition asserts in a a letter sent to top advertisers on the eve of Twitter's presentation. "Under Musk’s management, Twitter risks becoming a cesspool of misinformation, with your brand attached, polluting our information ecosystem in a time when trust in institutions and news media is already at an all-time low.  Your ad dollars can either fund Musk’s vanity project or hold him to account.”

2 comments about "On Eve Of Twitter's NewFront, Coalition Calls On Advertisers To Back Musk Pledge".
Check to receive email when comments are posted.
Read more comments >
Next story loading