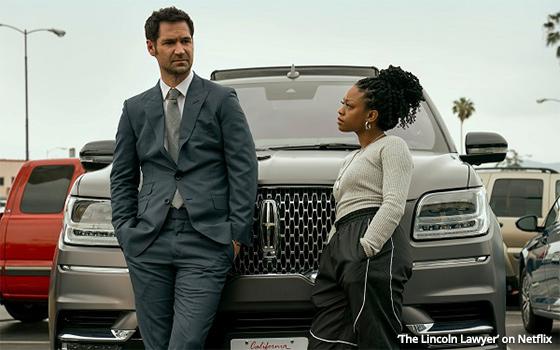 The 2011 Matthew McConaughey movie about an L.A. lawyer who does most of his work in the backseat of a Lincoln has been adapted for a new Netflix series premiering Friday.

In the TV show, titled “The Lincoln Lawyer” (also the title of the movie), the lead character is named Mickey Haller, played by McConaughey in the movie.

This time around, he is played by Manuel Garcia-Rulfo (photo above left) and he is still working in Lincolns.

That is Lincolns, plural. In the TV show, the Lincoln lawyer owns several Lincolns, including the Navigator in the photo, plus a mid-’60s classic that gets ample screen time in the show’s premiere episode.

The reason given for why this swashbuckling lawyer does so much of his work in his Lincolns is that he is so frequently on the move around Los Angeles that he might as well set up his life so he can get his work done while in motion.

Clearly, in both the movie and the TV show, this lawyer loves his Lincolns, otherwise he might have chosen some other luxury brand to serve as his office away from the office, such as Cadillacs, for example.

The 2011 movie was generally reviewed positively and went on to earn grosses of $87 million, according to Wikipedia.

Perhaps on the basis of its popularity, McConaughey became linked to the Lincoln brand in such a way that he went on to star in a series of commercials from 2015 to 2020. The car spots reportedly drove sales for Lincoln.

They were certainly memorable. In the many commercials he made for the brand, McConaughey was seen at the wheel of a Lincoln (almost always an SUV) driving alone and musing about life in a way that seemed improvised.

The point of the sometimes moody spots seemed to be that the comfort, performance and safety of these Lincoln SUVs made operating these vehicles both safe and easy -- allowing time for reflection and even daydreaming while driving.

Car brands do not usually get their names in the titles of TV shows and movies. Nor are they often given co-starring roles with a leading man either. Lincoln gets both of these in the new TV show.

“The Lincoln Lawyer” starts streaming on Netflix on Friday (May 13).