Husband's Time-Traveling Is Not An Excellent Adventure 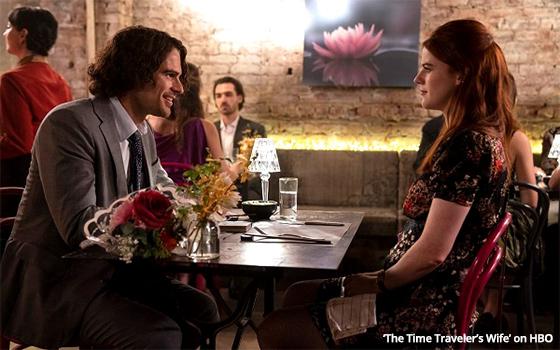 The time traveler’s wife’s husband gets more screen time than she does in the premiere episode of “The Time Traveler’s Wife” Sunday on HBO.

This is likely because the episode needs its entire 50 minutes to explain the ins and outs of the time-traveling that underpins the whole thing.

And since he is the one doing the time-traveling, it makes sense that we would learn all about it from his point of view.

The series presents a new take on time-traveling. In the show -- as in the 2003 novel on which it is based and in the 2009 movie version of the novel -- this man’s time-traveling has nothing to do with changing the course of history or suddenly meeting Abraham Lincoln.

On his time-traveling trips, this husband has no fun and learns nothing. Nor does he have any excellent adventures in the manner of Bill and Ted.

Instead, he has no control at all over his time-traveling, which comes on suddenly while he is in the midst of going about his life.

He plummets into his destinations just as suddenly and stark naked too, with his clothes left in a pile on the spot where he happened to be standing or sitting when these time-traveling episodes whisk him away.

These time-traveling intervals stem from a rare genetic disorder. Indeed, he may be the only human being on the planet who is afflicted in this way, although this is not made clear in the premiere.

There are a number of other details about the idiosyncrasies of his time-traveling, but the TV Blog does not have 50 minutes (or the word-count it would require) to go into all of it.

Suffice it to say that it’s complicated, but also fascinating. Conjuring up this time-traveler’s life must have been quite an achievement for the author of the novel, Audrey Niffenegger.

Despite the husband’s omnipresence in the series premiere, the wife who gets top billing in the show’s title has her own side of this story.

Living with a man given to sudden time-traveling has understandable challenges and we learn more and more about how she came to be married to this man as Episode 1 proceeds.

The stars of the show are Theo Jones as the husband Henry and Rose Leslie as Clare (pictured above).

They are well cast, and one reason is that each of them is called upon to play their characters at different ages, roughly from around 20 to just shy of 40 (at least in the first episode).

And in each instance, they manage to look the part with only minimal makeup changes and some hair alterations.

Although Clare is not a time-traveler like her husband, her story goes back and forth in time along with Henry’s.

If that sounds complicated, then that is because it is complicated. This show’s complications are its best attributes.

“The Time Traveler’s Wife” starts Sunday (May 15) on HBO.