@really Foolish In The Extreme 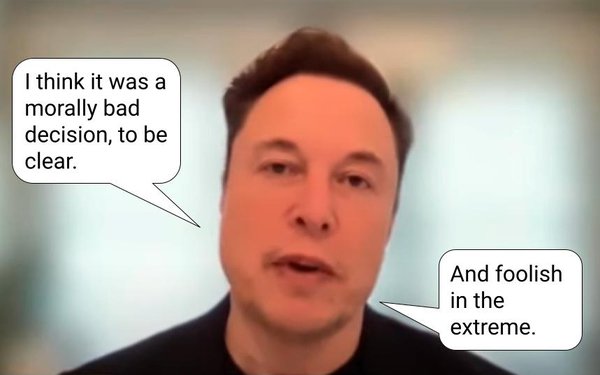 While I still think it's a bad idea for Elon Musk to own and operate Twitter, I'm changing my mind about his inclination to lift the ban on @realDonaldTrump's account, because I think most of America has worn out of the twice-impeached former president's gaslighting antics, and that the more exposure he gets, the more people will realize how nice it was to be without his omnipresence.

"It did not ultimately result in Donald Trump not having a voice," Musk said during an interview at the Financial Times' "Future of the Car" conference Tuesday. "He is now going to be on Truth Social, as will a large part of the right in the United States and I think this frankly could be worse than having a single forum where everyone can debate."

Musk went on to call Twitter's decision to permanently ban @realDonaldTrump a "morally bad decision" and "foolish in the extreme."

I'm not sure I agree with the moral part, but I think shining more light on someone who is foolish in the extreme might actually be a good thing -- not a bad thing -- as we head into the next rounds of political discourse.

After all, as the proverb goes, sunlight is the best disinfectant.

Especially when it's about someone who would foolishly recommend shining it inside people's bodies.

covid-19
1 comment about "@really Foolish In The Extreme".
Check to receive email when comments are posted.
Next story loading