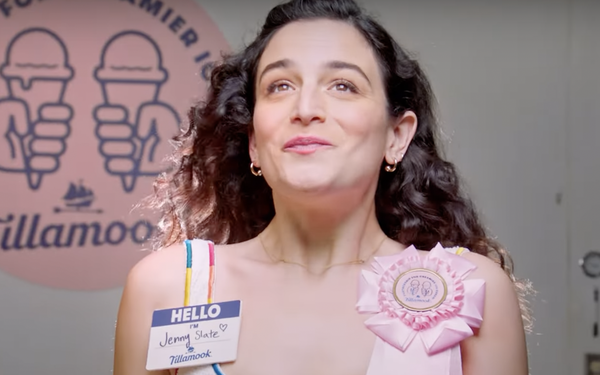 The PCIC was created last year as a tongue-in-cheek way of emphasizing Tillamook ice cream’s overindulgence in dairy cream and avoidance of ingredients like artificial growth hormones for cows.

“Last year, we took an approach to wake people up that not all ice cream is created equal,” Tillamook manager of public relations and partnerships Bridget Ryan tells Marketing Daily. “You see a lot of products that are labeled as ice cream that may or not be ice cream” because of their dairy cream content—or lack thereof.

“After waking up individual consumers, we now want them to share that message for others.”

Sharing is the main thrust of creative from the Sockeye agency featuring Slate, whose most recent movie role is in this year’s Amazon original “I Want You Back.”

This spot opens with an outdoor view of the Tillamook Creamery—one of Oregon’s most popular tourist attractions—before showing Slate and others enjoying ice cream samples.

Slate wonders whom she could share the creamy experience with before shouting “It’s time to share” and running out the door to spread the creaminess at a variety of venues, telling two people to step away from their Sad Ice Cream containers and taste Tillamook instead.

Tillamook has replaced its decade-old Volkswagen “yum buses” with a single ice cream truck that will sell scoops and cones starting this month in Atlanta, Baltimore and Washington, D.C.

“Those have been big markets for us as part of our eastward expansion,” Ryan adds.

Consumer challenges on platforms like TikTok and Instagram enable people to win prizes ranging from a Tillamook ice cream cooler to a PCIC flag signed by Slate.

Those who sign up to join the PCIC on a dedicated website will be entered to win a stay at the River Cabaan riverfront cabin in Tillamook, Oregon and a trip to Tillamook Creamery.