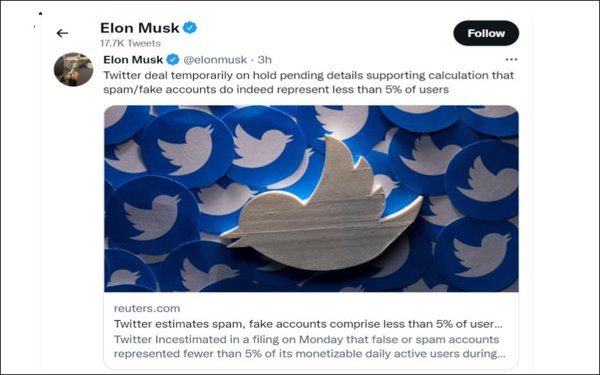 Elon Musk seems to continue to delight in keeping the world guessing about his real intentions regarding Twitter.

After causing his latest media furor just days ago by proclaiming that he will lift Twitter's ban on Donald Trump once he owns the social network, Musk this morning tweeted that the $44-million Twitter deal is "temporarily on hold pending details supporting calculation that spam/fake accounts do indeed represent less than 5% of users."

After Twitter's stock started to drop, however, the Tesla/SpaceX chief/world's richest person tweeted: "Still committed to the acquisition."

The stock plunged more than 20% after the first tweet, in premarket trading, but following the second tweet, it was down 12% ahead of the market opening.

The "on hold" tweet linked to a May 2 report by Reuters spotlighting a new Twitter securities filing that included that estimate of fake accounts and also said that until the deal with Musk closes, Twitter faces risks including whether advertisers will continue to spend on the platform and "potential uncertainty regarding [its] future plans and strategy."

Musk had recently tweeted that purging "spam bots" was once of his priorities for Twitter.

The spread between the offer price and the value of Twitter shares "had widened in recent days, implying less than a 50% chance of completion, as investors speculated that the downturn would prompt Musk to walk or seek a lower price," Reuters reports this morning.

Musk has had to sell at least $8.5 billion in Tesla shares and as of last week had pulled in 18 investors, including a Saudi prince, bringing their total to $7.14 billion, and allowing Musk to reduce the loan he has taken to $6.5 billion, from $12.5 billion.

Twitter's stock has been trading below Musk's offer price. In addition, Tesla's stock has lost about a quarter of its value since Musk's stake in Twitter was disclosed on April 4 (a period during which  most other tech stocks have also been pounded). Tesla's price rose about 7% in premarket trading after the "on hold" tweet.

Since Twitter's estimate of fake accounts has remained stable since 2013, some Wall Street analysts are speculating that Musk's "on hold" tweet is a ploy to get out of the Twitter deal or bring down its price.

“The $44 billion price tag is huge, and it may be a strategy to row back on the amount he is prepared to pay to acquire the platform,” Susannah Streeter, an analyst with Hargreaves Lansdown, told The Wall Street Journal.

"The nature of Musk creating so much uncertainty in a tweet (and not a filing) is very troubling to us and the Street and now sends this whole deal into a circus show with many questions and no concrete answers as to the path of this deal going forward," Wedbush analyst Daniel Ives wrote in a note cited by Reuters.

Musk's agreement does not allow him to bow out of the deal based on a declining business environment, and obligates him to pay Twitter a $1 billion break-up fee if he fails to follow through on the deal, per that report. It also contains a "specific performance" clause that would allow a court to force him to complete the deal, although such clauses are rarely enforced.