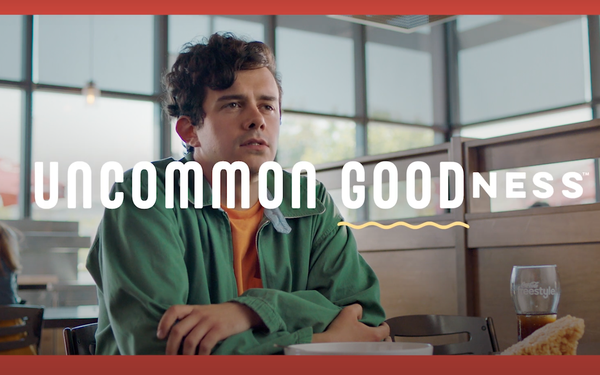 Noodles & Company is in the midst of repositioning, aimed at wooing customers and employees alike to its "Uncommon Goodness" platform. And it's using the pivotal moment to debut a new ad campaign, focusing on a devoted -- if slightly odd -- super fan.

“We’ve always been intentional about putting team members first,” she tells QSR Land in an email. “We believe that by creating an inclusive and supportive environment where team members can grow their careers and show up as their true selves, they will create an environment where every guest feels at home and welcome when they dine with us.”

That led to the Biggest Fan idea. The quirky character “loves Noodles so much that he doesn’t want to leave,” she says.

The campaign is running nationally on CTV and digital media, including Facebook and Instagram. Out-of-home is also scheduled for Denver and Chicago, and it’s also cooking up an integration with video-game network Anzu.

Like other restaurants, the Broomfield, Colorado company has struggled with one of the tightest labor markets the restaurant industry has seen in years.

The Uncommon Goodness effort highlights several new benefits for employees. They include immigration reimbursement and an equity partner program for general managers. The chain also provides up to $625 per employee in incentives for mental, financial and physical health perks, including gym memberships and pet adoption fees.

It's rolling out a quarterly mental health series and expanding employee resource groups for BIPOC and LGBTQ team members.

The new platform also sweetens the deal for members of its loyalty program. Among the offers: It’s begun rolling our LEANguini, a new menu item with 56% fewer net carbs -- “a first-of-its-kind noodle that defies pasta logic.” Loyalty members got to taste it first, weeks before the rest of the world.

The 450-unit chain hopes the new work raises awareness as it steps up its expansion plans. Restaurants are now concentrated in Colorado and the Midwest, and it intends to grow 10% a year until it reaches 1,500 units.

“Even above sales, the campaign is focused on ensuring our guests and future guests know what Noodles has to offer when it comes to providing fresh, flavorful, and quality food,” Pool says. “As these attributes become more top of mind, we hope Noodles will become an even easier decision for our guests.”

She also believes the new positioning, “paired with a refreshed look and feel in our creative, will continue to drive increased engagement across our channels.”