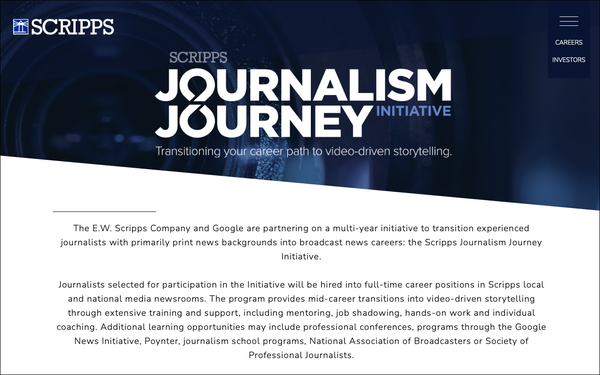 The E.W. Scripps Company, one of the best-known newspaper and content-syndication companies of the 20th century, which divested its print assets to focus on the broadcast television market in 2014, announced last week it's partnering with Google on an initiative to transition print-media news journalists into broadcast news careers.

Scripps is the nation’s fourth-largest local TV broadcaster, with a portfolio of 61 stations in 41 markets. It also owns Court TV, Ion and other channels.

Called the Scripps Journalism Journey Initiative, the program would provide mid-career transitions into full-time work in local and national Scripps newsrooms. Applicants will be provided extensive training in video-based storytelling and mentoring, plus job shadowing, hands-on work and individual coaching. the company expects to start accepting applications this summer.

Additional learning opportunities may include professional conferences, programs through the Google News Initiative, Poynter, journalism school programs, National Association of Broadcasters or Society of Professional Journalists, the company said in a statement on its job site.

Positions may include beat/specialty reporter, specialty executive producer, photojournalist, editor/manager, documentary producer and copy editor. Scripps is already seeking a director, a senior talent-acquisition partner and a learning and development specialist for the program, which would kick off in the fall.

In an interview with Poynter,  Scripps Company CEO Adam Symson noted the decline of the newspaper industry and the consequent loss of jobs. “Local newspapers in particular are losing their relevance and their reach,” he said. “And as a result of all of the downsizing, our industry is losing fine journalists to other careers.”

The opportunity for Scripps, he said, is to set the best of these journalists up in careers at Scripps. “They’ve already got the journalism part down, but they have to have the platform delivery down,” he said.