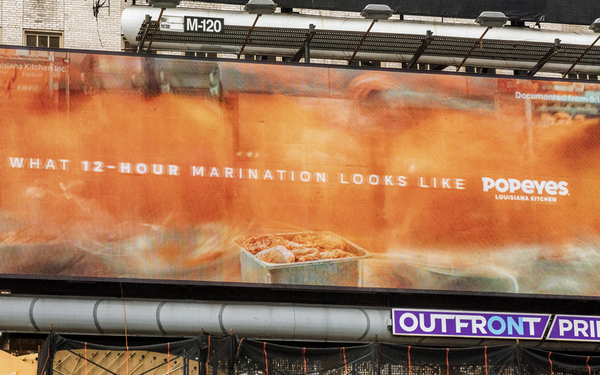 Popeyes Louisiana Kitchen leveraged a combination of out-of-home and print advertising to showcase its 12-hour process of preparing chicken, and then communicate—with paper—how crunchy it sounds when eaten.

To visually document the 12-hour prep process, the Gut Miami agency enlisted long-form photography expert Franke Relle in what Popeyes says is the first time the technique has been used by a QSR brand.

The marination was photographed over a period of 12 hours in a Popeyes kitchen and then condensed into a single image for OOH billboards in high-traffic areas of Chicago, Los Angeles and New York City this month.

“In New York, we chose Times Square because we wanted people to just walk by, take a second to take them in, understand them and perceive the story we’re telling,” Gut associate creative director Daniel Jaramillo tells Marketing Daily.

The OOH images also ran in the print editions of the New York Post, Chicago SunTimes and New Orleans Times Picayune, and were posted inside Popeyes restaurants.

In New Orleans, representatives of the chain stopped people on the street and handed them flyers they were instructed to crumble to produce a crunchy sound.

“We wanted to film people and see their reactions, because it is a very interesting paper that we used,” Jaramillo says. Videos of these on-the-street encounters will be posted on social media.

Similarly, ads in magazines encouraged people to tear them out and crumple them—a process that also produced the desired crunchy sounds.

“It caught them by surprise that the sound was so similar. People were not expecting to see something so kind of traditional convey a message in such a different way,” Jaramillo says.

It promoted the launch by offering 25 people early access to the new item through the micro-website popeyesblinddrop.com.