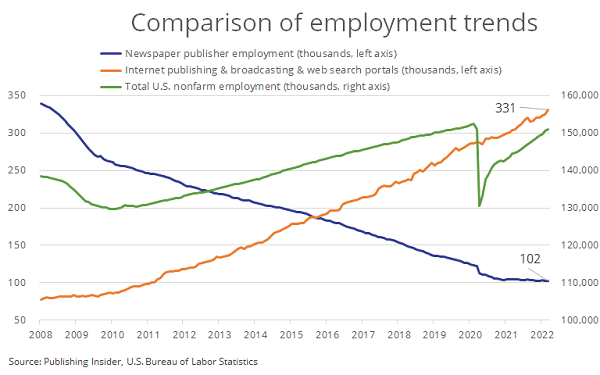 The labor market has almost fully recovered from the pandemic slump, with a variety of industries complaining that they can’t find workers. Amid recent reports of technology companies cutting staff or implementing hiring freezes, those cuts haven’t shown up in data collected by the U.S. Bureau of Labor Statistics.

The internet media category has steadily added workers for years, though that growth includes search engines such as Google and social media companies like Facebook that thrived as people spent more time online during the onset of the pandemic.

In contrast, the newspaper industry shed workers at the beginning of the pandemic, hastening a longer-term trend as readership shifted to digital media and advertising revenue declined. In the past couple of years, newspaper employment has held steady at about 102,000 workers. The decline wasn't as steep as after the last recession in 2008-09, which was followed by the rapid growth in social media advertising.

Unfortunately, the decline in newspaper employment has accompanied the appearance of “news deserts” throughout the country, a worrisome condition that digital media haven’t abated.